Bitcoin Drowned Below $50K But The Bulls Are Not Fazed 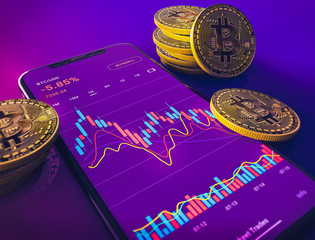 Bitcoin had been grinding up nicely in the past several weeks and many proponents said that it would reach above $63,000 by the end of February. But, the last 24 hours have seen a major correction hit the market.

The BTC price plunged rapidly from above $58,000 to settle below $48,000 in the process losing $11,500 which is a correction of nearly 20%. That pullback might have been anticipated as 28,000 was deposited to the Gemini exchange. The crash liquidated over $1.64 billion worth of BTC futures contracts which translates to around 8.5% of the total $19.5 billion in open interest that had coincidentally just recorded an all-time high.

Although these are considerable figures, they are lower than the futures liquidation on November 26, 2021. At that time, the 16% correction that followed BTC price testing a $16,300 low and it reduced the open interest by 17%. The correction in the bitcoin market caused most of the other cryptos to drop alongside bitcoin which caused the bitcoin market dominance rate to rise as a result.

In the wake of that big price movement, investors’ positive expectations about bitcoin appear to remain intact. Both the futures contracts’ funding rate coupled with the options 25% delta skew were not showing any red flags. However, will history repeat and produce a dull and corrective March?

As the market charts show, negative price swings and reductions in bitcoin futures open interest do not affect bitcoin’s long-term growth. Between January 19 and 23, the indicator dropped by 20% but it took just two weeks to recover losses to reach the $13 billion level. 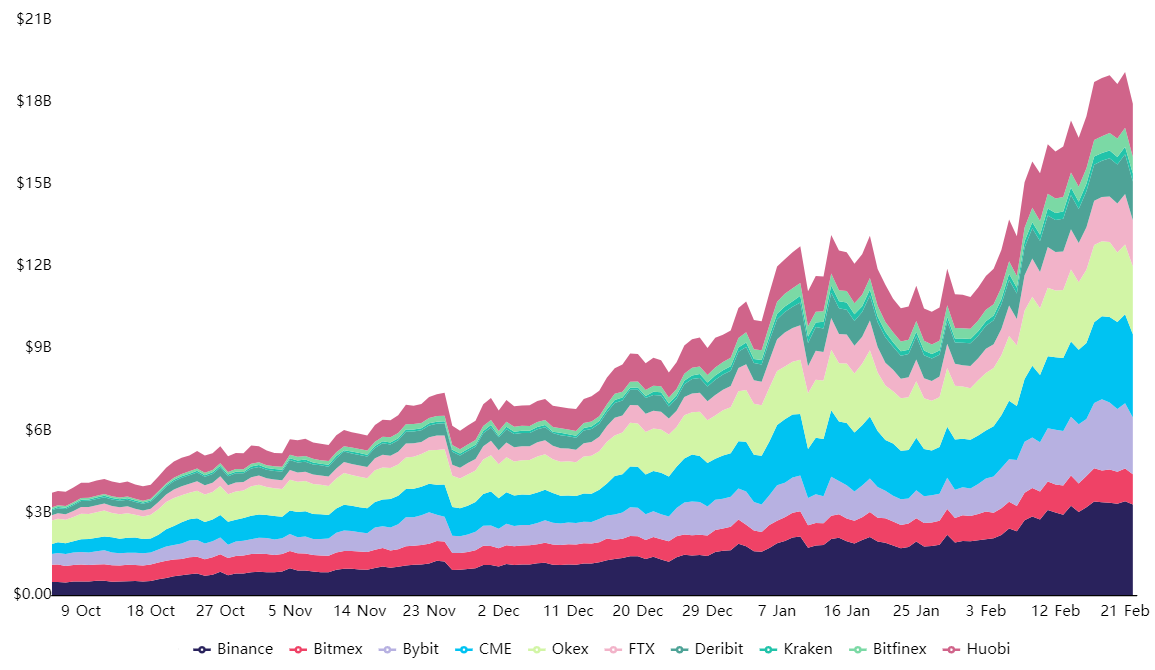 Open interest will vary quite aggressively when the traders are using excessive leverage. When that happens, normal price fluctuations will result in cascading liquidations, eventually reducing the outstanding number of these open contracts.

By measuring the futures contracts premium against the current spot levels, one can infer whether the pro traders are leaning bearish or bullish. Normally, markets show a somehow positive annualized rate, a situation known as ‘contango.’

Even though the premium toned down after it surged to reach 5.7% on February 17, it has since plunged to 3.5%, which is the market average. Considering that there are 30 days left for the March 26 contract expiry, this market scenario translates to an extremely bullish 50% annualized rate.

As previously reported, the perpetual contracts funding rate has surpassed 2.5% per week. Hence, arbitrage desks might be paying a huge premium on March contracts to profit from the rate difference.

The 25% delta skew is designed to measure how the neutral-to-bullish call options are priced against equivalent bearish put options. 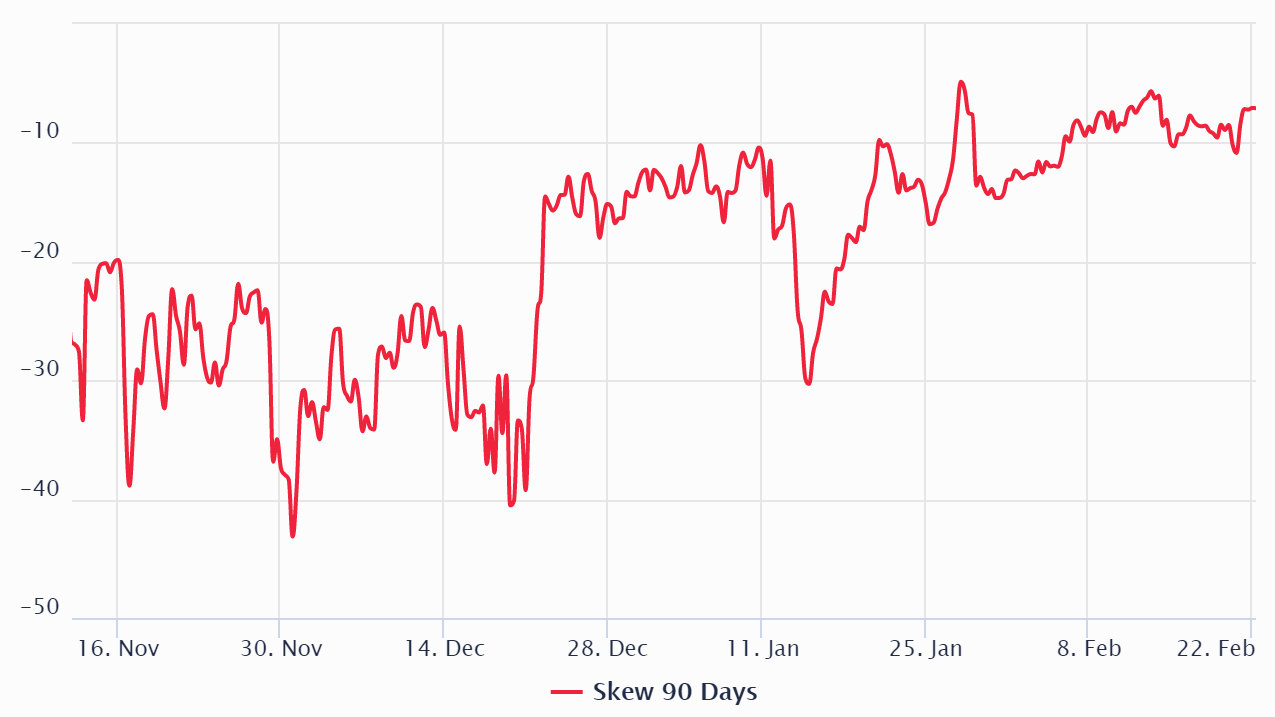 This indicator acts as an options traders’ greed and fear gauge, and currently, it is sitting at 6% which means that protection to the upside is more expensive. The market action further confirms the absence of desperation from the top traders and market makers.

Current market action may be surprising to the new market participants. However, those who remember when bitcoin’s price crashed by $11,200 between January 10 and 11 will also know that these steep price movements may not be out of the norm, mostly considering BTC’s 6-day volatility at 5.1%.

The data indicates that traders who are buying the latest dip might eventually come out on top. Bitcoin has positive newsflow and the growing interest from the institutional investors might intensify after the latest drop below $49,000.

No market has ever gone up in a straight line. It is healthy and expected for corrections to happen from time to time. Such corrections are considered to be a ‘reset’ for the market, reverting to the mean trendline, and the euphoria fades.

At the first stage of correction, traders and analysts expect that the corrective move would be tiny, as the sentiment begins to shift gradually. The moment this correction continues, the sentiment worsens as the prices move lower. At the bottom, bitcoin is called ‘dead’ and a Ponzi scheme, after which the price starts recovering.

The critical question that comes, nonetheless, is whether the market will see a lengthy correction or whether BTC’s price will hold above the green spaces shown in the charts. In this case, the green space is the previous period of compression that technically should serve as major support.

If the support area between $42,000 and $44,000 holds firmly, the upside movement will once again resume. In that context, the point of interest that has formed at $63,000 is still on the table.

Nevertheless, the bearish divergence and the weakness that was witnessed at the start of the week suggest that more downside movement is possible. Hence, if the $42,000-$44,000 support zone breaks, a further correction toward $37,000 might arise.

March Is Not A Bullish Month Historically

The weekly chart for BTC indicates that March seems to be a period of correction or consolidation for the crypto market. Major corrections happened in 2017, 2018, and 2021 in this period while 2016 and 2019 experienced sideways price action.

History is not guaranteed to repeat but it mostly rhymes. Hence, historical data normally offers insight into how the market cycles work. With that in mind, the critical indicator to watch out for is the 21-week moving average (MA) that needs to hold bitcoin’s price from plunging further.

Critical Levels To Watch In The BTC Market

The daily bitcoin chart indicates that there are some critical levels to watch for the time being. Firstly, the recent plunge brought bitcoin’s price to a critical support level. It should hold this zone between $42,000 and $44,000 to avoid more downside movement.

If the support fails to hold, a further plunge to the level located around $37,000 is possible. That would open the way for a retest of the 21-week MA.

Nonetheless, if the green zone provides support, a rebound might arise pushing bitcoin toward $63,000. But, it is still too early to call since historically the end of February and March is a corrective period for the markets in general.

New research conducted by CrossTower says that institutional buyers will hold the price of bitcoin above $50,000. In their report, institutional crypto trading platform CrossTower claims that huge investors will not let bitcoin fall far below $50,000.

Based on that report, the addresses that hold more than 1,000 BTC surged to record highs in January in the wake of massive retracements. That shows there was strong dip-buying from the whales despite the considerably high bitcoin prices.

When combined with positive business developments in the crypto sector, CrossTower is convinced that the outlook is still bullish for the digital asset markets. The analysts highlighted bullish events like BNY Mellon’s newly launched custody services and Mastercard’s decision to integrate certain cryptos. 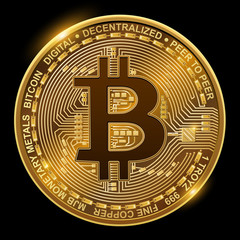 “We believe the record amounts of addresses holding 1,000+ BTC in recent weeks is proof of rising institutional interest and likely reflects the many headlines in January and February of institutional investors becoming active in Bitcoin. In our view, many institutional investors are entering with a buy-and-hold mentality given their understanding of Bitcoin as digital gold. The on-chain data suggests that these investors, traditionally seen as smart money, saw the January price weakness as an opportunity to acquire BTC or enter the space, which supports our bullish view of BTC.”

CrossTower also mentioned a steep drop in the sum of bitcoin held on centralized exchanges amid record stablecoin volumes and holdings. The analysis described the trend as offering more bullish momentum to the markets. In that context, while analyzing data from CryptoQuant, CrossTower discovered stablecoin volumes on crypto exchanges reached $7.4 billion as of February; up almost159% from December 2021.

Bitcoin is currently struggling to retake the $50,000 level after its steep correction on February 22. Despite that correction, BTC is still volatile at some point rising back above $54,000 and then dropping below $48,000 once more. At the moment, the flagship crypto is trading above $48,000, awaiting the next price action. 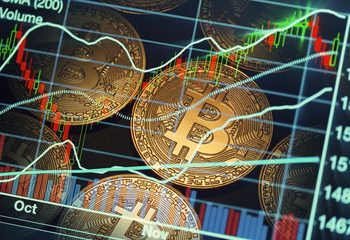