Bitcoin price trimmed over $1,700 within two hours due to pressure from sellers near $20,000. Ether also crashed below $570. On December 1, traders were looking for volatility, and bitcoin never disappointed. After challenging $20K and peaking at $19,924, bitcoin hit lows of under $18,300 within two hours.

Data acquired from TradingView tracked the BTC/USD pair as it delivered some of its most unpredictable movements since its inception. At the time of writing, the crypto is highly volatile in a range bordered by $18,300 and $19,000, and conditions changing by the minute. 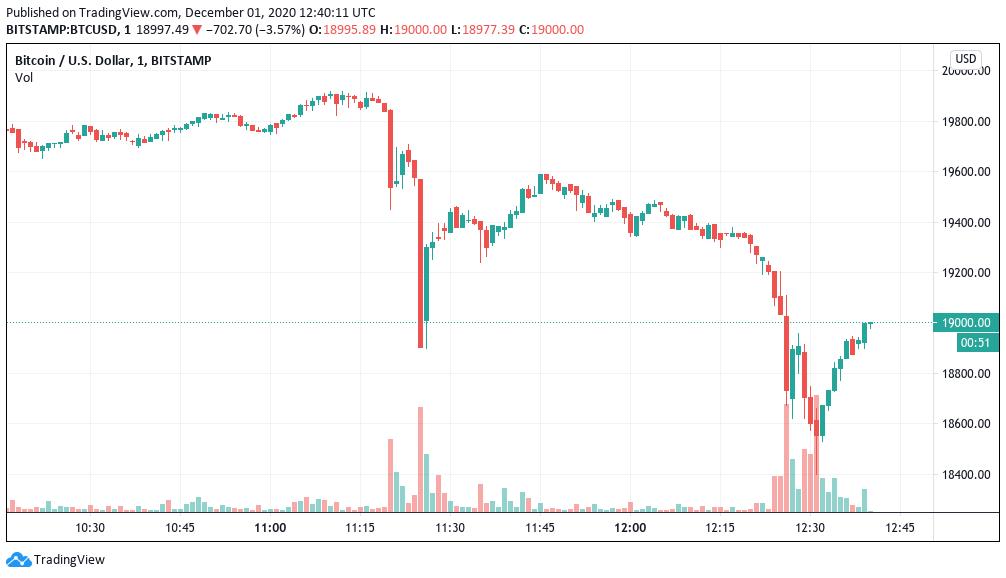 An attempt to explode above $20,000 collapsed resulting in a firm rejection along with a $1,000 plunge to $19,000 in under ten minutes. This move mimics Bitcoin’s behavior from the past week when an initial attempt to rise above $19,500 also resulted in major rejection and volatility.

As reported on November 30, traders now might be watching the newly established BTC futures gaps, formed between $16,900 and $18,300. These gaps may get ‘filled’ if the BTC price corrects further.

In the meantime, volatility spilled over to the altcoin world. Ether abruptly lost $600 to trade below $570 at the time of writing mirroring bitcoin’s movements. The biggest altcoin has therefore reversed yesterday’s gains.

This market performance has put a dampener on the launch of Ethereum 2.0, Ether’s parent network’s much-awaited protocol upgrade.