Ethereum’s beacon genesis event is scheduled to take place on December 1. With nine hours to spare before the deadline, the Ethereum’s deposit contract surpassed its threshold of 524,288 Ether. The threshold was crossed at 2.20 am Universal Time on November 24, locking ETH 2.0’s beacon chain genesis for December 1.

16,384 validators were involved in the process of depositing the contract since it went live on November 4. Earlier, worries were arising from low staking participation, but transfers to the deposit contract steeply surged over the past day. Over 200,000 ETH were sent to the contract within 14 hours.

Reports confirmed that ETH 2.0’s beacon chain genesis would happen on the earliest possible launch date of December 1. Genesis was scheduled to take place a week after the necessary deposit contract’s threshold was met.

While genesis participants cannot withdraw their coins until 2.0 reaches Phase 1.5; where it will integrate the Ethereum mainnet with ETH 2.0’s beacon chain together with a sharded environment; most of the hodlers are waiting for third parties to launch the withdrawal-enabled staking services. All that happens despite the possible risk of exit scams.

We did it! Ethereum's proof of stake chain will launch on December 1st.

💯%. We have now reached the minimum necessary for chain launch, including the pending transactions pic.twitter.com/kPGNX6qqk6

Vitalik Buterin, Ethereum’s co-creator, also went on Twitter to celebrate the late influx of deposits. He had earlier urged individuals to deposit before the beacon chain’s activation in case that they want to participate in the genesis group of stakers.

Deposit contract is at 460k ETH (~87.7% of target) with 12 hours left until the earliest possible launch activation time!

(Launch will happen at 7 days after activation; need to reach 524288 ETH to activate)https://t.co/yqy87eMafV

Many thought that low staking participation would result in more delays since Ether holders were not ready to lock their tokens without being sure when they would be allowed to make withdrawals.

Today, it is anticipated that the stakers can withdraw their tokens simultaneously with the launch of “Phase 1.5”. That will see the current Ethereum mainnet merge with ETH 2.0’s new beacon chain and the sharding system. Phase 1.5 is scheduled for launch sometime in late 2021 or early 2022. 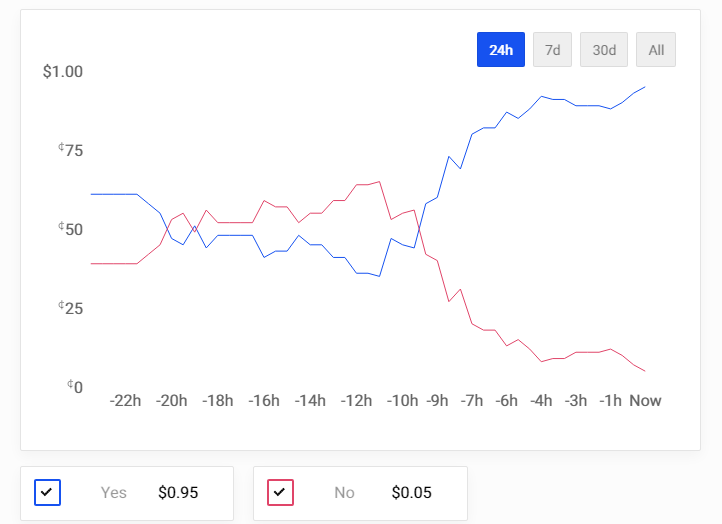 That late surge in deposits saw massive volatility on the Polymarket’s prediction market for whether the ETH 2.0 genesis event will happen on December 1, with contracts favoring a spike from $0.36 12 hours ago to over $0.95 currently.

The forthcoming launch of Phase 0 has increased bullish pressure in the ETH markets, with Ether exploding into new year-to-date highs above $600.