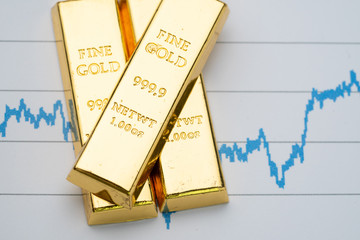 Gold awakened, recovering from the drop on August 27, as the dollar sank with most of the major investors weighing the effect of the Federal Reserve’s new approach to setting United States monetary policy.

The precious metal gained the most in almost a fortnight and the US dollar touched a two-year low a day after Fed Chair Jerome Powell spoke. He said that the central bank will aim for inflation that averages 2% over time. These comments sent bullion on a roller-coaster ride in the Asian and European sessions on Friday.

Powell signaled the central bank will stay accommodative for longer taking a more tolerant approach on inflation, but will not hesitate to act in the case that consumer prices rise significantly above its goals. The head of market analysis for EMEA and Asia zones at StoneX Group, Rhona O’Connell, said:

“Gold strengthened Friday due to a more measured appraisal of the shift in Fed nuances, along with a weakening dollar, for the same reason.” 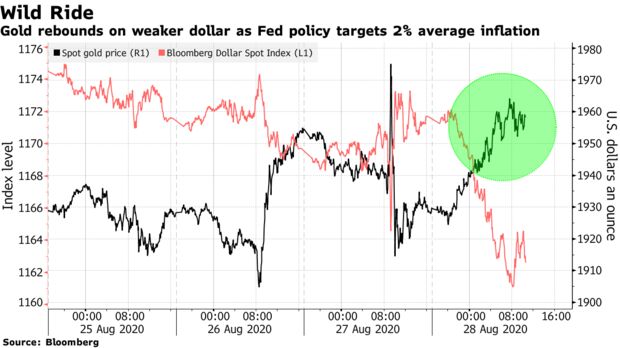 Increased inflation tolerance coupled with low-interest rates should make the US real yields drop in the medium-to-longer term. Such a scenario is supportive for gold. These sentiments were made by Vivek Dhar, an analyst at Commonwealth Bank of Australia.

But, the fact that the Fed will also act in the case of inflationary pressures adds doubt to how high US 10-year inflation expectations can reach, he added.

By 10:40 a.m. in New York, spot gold jumped 1.5% to $1,957.64 an ounce. It headed for its first weekly gain in three weeks. The metal is still down more than $100 from its record set earlier this month as the risk-on sentiment improved. However, it is still one of the best-performing commodities in 2020 after the COVID-19 crisis and major stimulus measures enhanced demand for havens.

The Bloomberg Dollar Spot Index plunged by 0.9% to reach its lowest since May 2018. On the other hand, the US equities rose. Notably, the economic confidence in Europe continued to improve in August as the latest data show. However, the job cuts in recent months across the continent meant consumers remain quite worried about the labor market. In the United States, the rebound in consumer spending slowed in July as the virus cases rose again in some states.

The Federal Reserve’s shift to let inflation and employment run higher may indicate that policymakers want to keep interest rates low for many years to come. Such a scenario will lift the appeal for the non-interest-bearing gold.

For now, there is still room for bullion to set new all-time highs. However, it may take some time as explained by Ole Hansen who is the head of the commodity strategy at Saxo Bank A/S. Hansen added:

“Powell’s speech did not threaten the bullish narrative for gold and silver. Low-interest rates for longer, a weaker dollar, massive amounts of stimulus; and the increased demand for inflation hedges are likely to continue to drive demand for both metals.”

The most significant risk to gold currently remains the discovery of a vaccine and a steep correction in stocks. That would result in a major drive to raise cash. 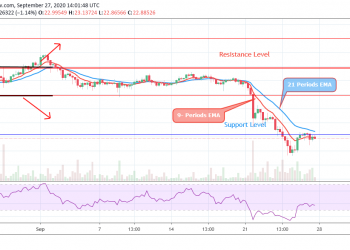