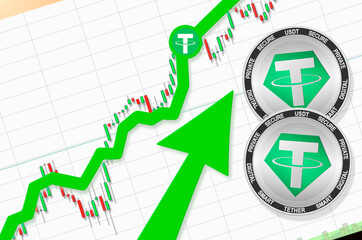 The growing number of investors going for the digital coins as an inflation hedge during the current health crisis has resulted in new records in crypto trading volumes. On August 26, 2020, reports emerged that Tether has by far become the world’s most widely used crypto. Tether’s (USDT) monthly trading volume has already surpassed $1 trillion this August which is 49% more than Bitcoin.

With monthly trading volume around 50% higher than that of BTC, Tether, undoubtedly, represents the most crucial coin in the global crypto market. Being the world’s most used stablecoin, it has also become a pathway for most of the active traders into the cryptocurrency space.

Bitcoin is the world’s leading crypto in terms of market capitalization. The crypto has reached over $702 billion in monthly trading volume this August as revealed by the CoinMarketCap data.

Ethereum came in third on the list of most-traded cryptos with a $367.6bn in 30-day purchase volume. Statistics also reveal that Ethereum witnessed the most significant market cap increase in 2020. In the past 8 months, the market cap of the fourth most-expensive digital coin gained around 210%. It surged from $14.2bn in January to $44.1bn at the start of this week.

Litecoin (LTC), EOS, and Ripple’s XRP follow, with $79.2bn, $76.7bn, and $66bn in that order respectively. Data from CoinMarketCap shows that the three leading cryptos hit over $2.1trn in monthly trading volume.

Apart from ranking as the most traded coin in the crypto space, Tether also saw a considerable increase in market capitalization this year. In January, its market cap stood at $4.1 billion. Over the following three months, that figure rose to $6.1 billion. That upside trend continued in the months that followed with Tether’s market cap reaching $9.2 billion by the end of June.

Since that time, market capitalization has grown by $800 million reaching over the $10 billion mark this week. That is a 140% spike since the start of the year.