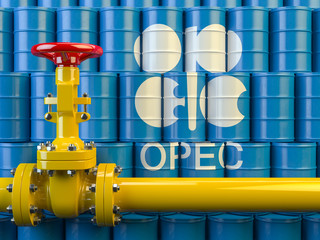 On August 21, Brent crude oil prices surged after OPEC+ reassured the global market that it plans to strictly cut its cumulative oil production. It plans to cut production by the agreed 7.7 million barrels per day.

In that context, the international benchmark Brent crude was trading at $45.01 per barrel at 0605GMT. That price represented a 0.2% increase after it closed at $44.90 a barrel on August 20. On its part, the American benchmark West Texas Intermediate was at $42.84 per barrel at that same time. That price represented a gain of 0.05% after it closed the previous session at $42.82 a barrel.

The market prices increased as OPEC+ vows to fully comply with the determined levels of oil cuts; for minimizing the available global supply to underpin the prices in the world oil markets. The Organization of Petroleum Exporting Countries (OPEC) and non-OPEC oil-producing nations on August 19 called for vigilance by all of the participating countries.

That decision underscored the fragility that exists in the current market and significant uncertainties especially associated with oil demand. OPEC oil producers together with its allies like Russia are known as OPEC+. The group met on Wednesday to review compliance with oil cuts; that are meant to support the prices of oil in the wake of the coronavirus health crisis.

The group said that there are signs of gradually improving market conditions which have also resulted in the lessening of the gap between global oil supply and demand. Nonetheless, OPEC+ warned that there will be a slower pace of recovery than expected due to the increasing risks of a persistent wave of COVID-19.

OPEC and its allies forced all the oil states who are pumping over production targets to further cut in their August-September production. That decision was made amid concerns of a sluggish recovery in the demand for oil and its products. OPEC insists that full conformity is important for the continuing rebalancing efforts and to ensure that the oil market remains relatively stable in the long-term.

On June 15, OPEC+ agreed to lower their current crude oil production cut level from the existing 9.7 million bpd to 7.7 million barrels per day (bpd) starting from August. The Joint Ministerial Monitoring Committee (JMMC) is scheduled to hold its next meeting on September 17. JMMC closely monitors the amount of crude oil each of the OPEC+ members produces.

The recent upward trend in oil prices is also supported by the escalating tension between Iran and the United States. That happened after President Trump said that he aims to ‘snap back’ international sanctions on Iran; which were lifted as part of a 2015 nuclear deal.

President Trump decided in 2018 to unilaterally exit Washington from that multilateral nuclear accord. This accord was majorly led by President Obama. In making that decision, Trump ignored the objections from all of the other participants in the pact who question the United States’ position in invoking a snapback since it is not a member of the accord anymore.

Based on the data published by the US Energy Information Administration (EIA) on August 20; US commercial crude oil inventories dropped by 0.3% or 1.6 million barrels; to settle at 512.5 million barrels for the week ending August 14. The market expectation was a decrease of 2.7 million barrels.

Nevertheless, the total number of Americans who filed for unemployment benefit in the past week surpassed one million; after recording the lowest figure the previous week since the health crisis started, according to the US Labor Department. A cumulative 1,106,000 jobless claims were filed translating to a week-on-week increase of 135,000.