Gold And Silver May Plunge In The Short Term, Trader Warns 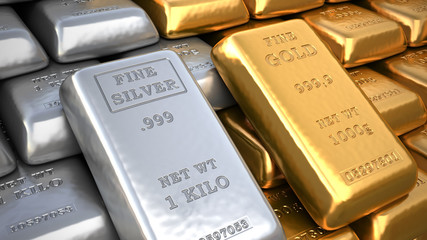 The precious metals might be in for more losses. That is what the charts are telling the chief market strategist at Miller Tabak, Matt Maley. He was speaking on August 13, 2020, to reporters.

For now, gold prices have cooled down since they hit record highs of $2,075 on August 6. The metal experienced its worst one-day plunge in seven years on August 11. On its part, silver has also reversed sharply recording its worst decline since 2008. Maley commented about gold:

“Even though its long-term fundamental picture looks intact, sometimes on Wall Street when it gets so extreme, you see a reversal and one that lasts for more than just a few days.”

He referred to gold’s relative strength index (RSI) which is an indicator that measures the overbought and oversold conditions. In the past week, when gold was exploding to its all-time highs, the RSI was at levels that were not seen since the 1990s. On the other hand, Silver’s RSI revisited the overbought extremes from 2011.

The momentum readings in the supporting ETFs were quite drastic according to Bespoke. RSI readings recorded on the SPDR Gold Trust (GLD) and iShares Silver Trust (SLV) reached records around gold’s August 6 peak, the firm explained. Maley added:

“Also, we look at the daily sentiment index, which measures bullishness amongst futures traders, and it got to 93% bulls last week in gold. Its nine-day average was over 90%. Again, when you get these kinds of extremes, it takes more than just a few days for it to work off.”

“Silver I don’t think would retrace quite as much, but I think it pulls back below 24 before you want to back up. Still like them long term, but short term, there’s still some downside movement to work off this overbought condition.”

The managing director of Vios Advisors at Rockefeller Capital Management, Michael Bapis, agreed with Maley on that prediction. He said:

“Fundamentally, I think it’s going to pause for a few different reasons”

Although gold has posted an impressive year-to-date performance, what was once considered a haven asset is now a volatile asset. Bapis added:

“Not only is the regular spot price high, but the inflation-adjusted price is off the charts as well. We would look to other alternatives such as market neutrals or global macro funds [that] will limit the volatility and they will be not correlated to the rest of the markets.”

For all those investors who want to own the precious metals in some form, Bapis said that they should go for the gold mining stocks. The gold miners are tracked mainly in part by the popular VanEck Vectors Gold Miners ETF (GDX). Bapis further commented:

“Gold miners are probably the best way to play this space for the near future because they are companies, they’re mining … they’re diversified in the space. But I just think that the actual gold commodity … and silver, for that matter, has just run up too far, too fast for no real fundamental reason.”

Bespoke experts said that the last 11 times the GLD has seen declines of 5% of bigger, like it happened on August 11, it happened to under-perform over the coming week and month. However, over the next six to 12 months, the ETF has delivered above-average returns, recording positive performance of 60-70% of the time, analysts stated.