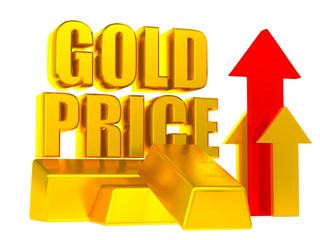 The latest reports indicate that gold is testing strong overhead resistance located just above the $1,800 zone. Interestingly, analysts say that its trajectory for the next 18 months will be determined by how the precious metal behaves now and for the next few weeks.

Many expect that gold will break its all-time high above $1,923 per ounce in the next 18 months if the situation in the global economy does not improve any time soon. But, a correction is also expected before that major breakout. The question now comes: will the corrections begin now or will it start from higher prices?

The long-term gold chart from 2001 up to today indicates that there is a strong rising trend of resistance that started from the 2018 lows. For the past two years, gold has been flirting with the resistance boundary but could not overcome it. In the meantime, on several occasions, sellers have appeared on the rising trend which has caused $100-$200 corrections at regular intervals. 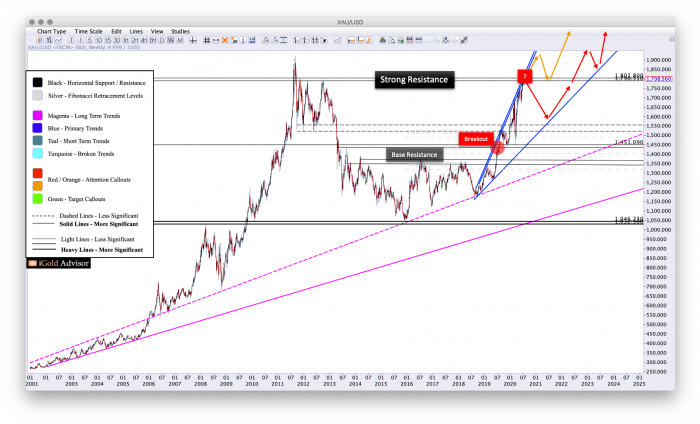 The second major resistance level that gold is currently challenging is located between $1,790 – $1,802. This resistance dates back to 2011-2012. Interestingly, following the all-time high for gold in 2011 enabled the precious metal to subsequently try to overcome the $1,800 zone on three separate attempts.

Nonetheless, gold failed on all these attempts and it subsequently entered a bear market that lasted until 2015. That same resistance zone that rejected gold on three different occasions in 2011-2012 is now getting tested again.

A Confluence Of Resistance

In general, there are two strong resistance zones and the confluence of which calls for a correction in the price of gold advances at some point before it threatens to break the all-time high.

The eventual outcome for gold over the next several weeks will paint a clear picture of the trajectory that the precious metal will take in 2021. In the first case where gold continues to move higher immediately will be met with massive selling pressure at the previous all-time high near $1,900.

If that happens, analysts expect a 10% – 15% correction into 2021. The correction will then be followed by a break of the all-time high by mid-year.

The second scenario is whereby gold will see a 10% – 15% correction first. That may happen if the precious metal is pulled down in the next wave of global deflation. It will then claw its way back up toward $1,800 next year. The breakout above the $1,900 all-time high would then be delayed up to late 2021 or early 2022. That scenario is shown above in red in the chart.