Offshore Oil On The Verge Of Collapse 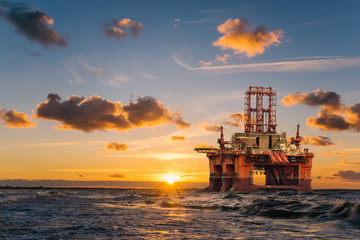 Spending cuts, project cancellations, and well shut-ins are some of the problems affecting the onshore oil producers. These troubles have now also spread offshore, which threatens the existence of the industry. Although the effects of coronavirus pandemic on onshore drilling might be wearing off now in some places where drilling costs are low, they may last longer for the offshore space.

Despite the vast progress made by many oil companies in the cost area, offshore drilling remains typically more expensive than onshore drilling. That remains the case since the method of extracting oil in the offshore sector is more complicated. In most cases, these costs cannot be avoided. Thus, in the current conditions, it means that offshore oil will suffer more than onshore oil.

Almost 33% of the oil that is remaining on the UK continental shelf is uneconomical to extract, according to a recent study. According to this study of the North Sea region, 28% of the oil was unprofitable, with Brent crude selling at $45 a barrel.

Brent has not traded at $45 for several months now, and it is unlikely that it will reach even $40 a barrel by early 2021 if we go by analysts’ projections. Therefore, it means that more oil will become uneconomical and not just in the North Sea.

In the US part of the Gulf of Mexico, just 12 rigs were operational in the latest weekly rig count by Baker Hughes. That is down from 22 counted in March and 19 in April. Scott Carpenter of Forbes notes that this is the lowest weekly rig count in ten years. If the oil prices remain low, the rig count will continue decreasing as the production platforms keep shutting down.

When the shale drillers started suspending production since their breakeven prices were more than the production costs of an oil barrel in many parts of the United States shale patch, fears came that some of the production may be lost forever. The case is the same for offshore production. In May, the Wall Street Journal reported that oil producers in the Gulf are shutting down production.

Most of the production might take years before it returns to normalcy. What is currently happening in the Gulf of Mexico is also happening in many other places around the world. Producers are highly pressured by crippled demand for oil due to the coronavirus-related shutdowns.

“I felt like I had a pretty good handle on it (2020 activity) three weeks ago, but I don’t know right now. What I would have told you then is that based on what we saw through the course of 2019, and even at the beginning of this year, activity was increasing in the deepwater.”

Nobody expected that a crash of this magnitude would plague the markets this year. The oil market was caught flat-footed by the price wars and health crisis. It is still languishing into the adverse effects of these occurrences.

When you look at the offshore segment of the oil industry, you will notice that there are three critical challenges highlighted by Rystad Energy. They include financial vulnerability, a steep drop in offshore oilfield services and equipment, and excessive capacity. These are problems reported in May by Offshore Magazine’s Jessica Stump.

These problems are not unique tot he offshore segment but are expected to have more severe effects. The offshore projects take longer to acquire approval to launch, which means that delays and cancellations may suffocate offshore production growth for many years to come.

Then, bankruptcies come in. Rystad Energy said that the coronavirus health crisis might lead to a loss of a staggering $5 billion in oilfield services purchases in Europe alone. Europe extracts almost all of its oil offshore. Thus, 20% of providers of these services may shut down.

Europe is not the only place that heavily relies on offshore oil productions. Many of the frontier regions like South America and Africa might also suffer setbacks due to the current crisis. The IHS Markit estimates that the losses may wipe out up to 14% of oil demand in Q2 2020. That translates to almost 14 million bpd, based on 2019 oil demand for some 100 million bpd.

Offshore oil accounts for about 33% of the global total. It is more expensive to extract compared to the onshore oil. However, it has a longer life compared to the unconventional onshore oil. An entire segment of oilfield services is focused primarily on offshore drilling and production. Most of the companies in the sector may not survive this crisis.

There is also a more comprehensive economic repercussion of the offshore oil crisis. For regions like the Gulf of Guinea and Brazil, project delays and cancellations in many offshore projects that have suddenly become quite expensive to develop may compound economic troubles besides the weak oil revenues due to international prices.

The last time it happened, offshore oil emerged from the crisis leaner, cost-efficient, and with lower breakevens. For now, only time will tell how the industry will emerge from the current crisis.