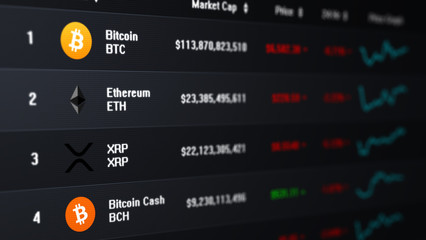 The struggles for market dominance in the crypto world between Bitcoin and Ethereum have now taken a major toll on the general cryptocurrency space. Over the weekend, Bitcoin overcame the first resistance level that had been created by a medium-term downward trend line. However, on May 4, it met the 200-day simple moving average and the upside movement became more complicated.

Bitcoin now has a 66% market dominance and when it manages to overcome the current obstacle, the main target will be 67.16 level and the next is located at the 68.3 level at the top of the long term bearish channel.

The negative effect of Ethereum in the short term is important. It has seemingly lost the support of the downward trend line that it already broke through about two weeks ago. Ethereum is at 9.39% and it might head south looking for support at the 8.90 level which is right at the base of the long-term bearish channel.

It is quite easy to imagine that there is a potential effect on the structure of the cryptocurrency market of this period in which the leading two crypto representatives are in somewhat opposite situations.

If Bitcoin manages to surge above the long-term bear channel, it will abruptly send ETH to a new bear scenario below its long-term bear channel. That may affect Ethereum severely in the medium and long term. On the flip side, if the situation turns positive to Ether, it will indicate an increase in capital flowing into the Altcoin segment.

The market sentiment in the cryptocurrency space, elaborated by the site alternative.me loses a point from the last measurement. At the 44 levels, it is almost adopting the optimistic side of the indicator.

Investors and crypto enthusiasts are currently not comfortable with the market and are still suspicious that the upside movement of the past few days could be the long-awaited new bull market.

This pair is at the moment trading for 0.0231, losing support at the 50-day exponential moving average together with the 200-day simple moving average. The daily low is hovering at the critical support level at 0.0227. Any move below that level the technical structure may worsen for the Ether’s interests against Bitcoin.

The MACD represented on the daily chart continues to cross downward since it gradually approaches the neutral level of the indicator. The reaction of that price when the averages reach that level is the integral component to the ETH/BTC pair for the medium-term performance.

The DMI on the daily chart indicates that the bears crossing the ADX line are continually activating a negative bearish pattern for the Ethereum’s interests. The bulls at the moment remain at high levels of trend strength.

Looking at the daily charts, the BTC/USD pair is trading at around $8,700 at the time of writing and it remains at last week’s relative high despite losing around 3% in the past 24 hours.

Looking at the upside, the first resistance has developed at $8,800 and the second one is at $9,200. The third resistance has formed at $9,750 and analysts believe that if Bitcoin rises past these levels, the next bull market might start.

Looking at the MACD indicator on the daily chart, it shows that BTC is losing its upward slope; and entering a bullish lateral consolidation phase. The DMI that is dominant on the daily chart reveals that the bulls almost broke the ADX line.

If the line is broken, it would end the bullish pattern and the BTC/USD pair might enter a more volatile phase; with the tendency pointing towards the bearish shocks.

The ETH/USD pair, for now, is trading at $202 and is somewhat maintaining its psychological support level at $200. Looking closely at the daily chart, the major moving averages continue to trend higher between $170 and $190.

The MACD, when reviewed on the daily chart, reveals that the moving averages are trying repeatedly to cross over to the downside. The crossing profile appears quite smooth which means that a bullish bounce should never be ruled out for now.

The DMI that has formed on the daily chart reveals that the bears are moving quite rapidly upwards. On the other hand, the bulls are losing strength after three weeks of leading the ETH/USD pair.

The pair at the moment is trading at around $0.22; meaning that the crypto is striving to break out of the major moving averages. There is a lot of negative news that is coming from Ripple Limited; and almost all of that news is linked to XRP.

Notably, the dismal sales figures for XRP among its corporate clients have raised doubts about the possibility of the implementation and projection of the Ripple Limited token.

The MACD indicator on the daily chart shows a loss of upside momentum. However, it retains some openness between the lines which makes sharp upside movements likely. The DMI as seen on the daily chart reveals that the bulls just above the ADX line; and with a high chance of a breakout. The bulls seem to be moving fast upwards and they appear to be getting ready to contest the stewardship of the XRP/USD pair.