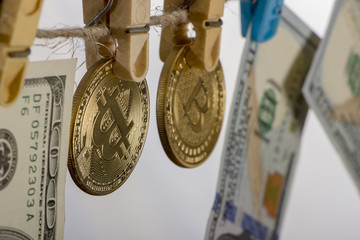 The latest reports have revealed that the Dutch Fiscal Intelligence and Investigation Service (FIOD) have caught up with two men who were allegedly involved in money laundering activities using cryptos.

According to a February 18 statement released by the International Revenue Service (IRS), the two men were apprehended on February 17. They were detained in connection with two different criminal investigations into money laundering that involved the use of cryptocurrencies. The National Office led both of these investigations for Serious Fraud, Environmental Crime and Asset Confiscation.

One of the two suspects is a 45-year-old man who is charged with laundering 2.1 million Euros. He allegedly used massive purchases with a crypto-backed credit card that the Netherlands tax authorities could not determine or explain, depending on his income and assets.

On the other hand, the other suspect is accused of having laundered 100,000 euros (nearly $108,000). He is accused of using crypto mixing service Bestmixer although the authorities have already identified the IP address linked to his Bitcoin address.

Dutch and Luxembourg authorities, along with Europol in May 2019, shut down one of the three biggest crypto tumblers.

The Money Laundering Challenge in Cryptoworld

Financial regulators throughout the world have said that there is some relationship between cryptos and money laundering on different occasions. A while ago, the Central Bank of Russia published a new set of rules for many suspicious transactions that widely categorizes all crypto-linked transactions as a potential money laundering risk.