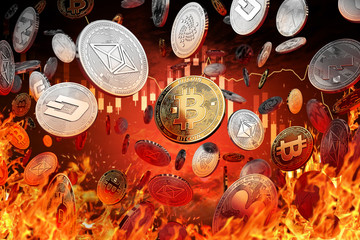 Volatility seems to be an understatement when referring to the crypto market. The latest price movements that have happened in the last five days has proven once more that things in this nascent market can turn from north to south in just a few hours. For quite some time, the thoughts of a probable new altcoin season have been circling.

Nonetheless, all prices dropped considerably in the past few days and for now, recovery seems optimistic at best. In the past few days, the price of Bitcoin has dropped from $10,100 to $7,850 in a 22% pullback against the USD. That plunge represents the steepest correction so far for this year. The most recent drop saw the coin lose over $200 in under an hour.

That flash crash did not affect just the flagship crypto but the whole market. Some of the major altcoins recorded more severe losses with Ethereum losing over 23% and Litecoin plunging by over 27%. From the top 10 crypto list, EOS and Bitcoin Cash registered losses of over 30%.

This seems to be somewhat a shock since a few weeks ago; people strongly felt that there is a possibility of altcoin season to appear soon. In August, many altcoins were enjoying serious gains ranging between 7% and 20% in some cases. These gains reduced Bitcoin’s dominance to less than 70%.

Amid these swings, many strongly believed in an emerging altcoin season. However, that season seems to have been put on hold as of late.

Normally, since the last several days have become extensively turbulent, the community and commentators started offering new predictions and prognosis. Just as it is the norm, opinions are coming in ranging from the crypto doom to the trend reversal and reaching new highs.

An interesting opinion came from one popular analyst. He says that history shows that the last time Bitcoin lost $2,000 in value swiftly; the price surged considerably in the following weeks.

Bitcoin has just dropped another $2000

For all the doom and gloom on here, I think this is great for the market. We've dropped into an area where traders/investors want to do business pic.twitter.com/1mPnbKYRMK

As reports emerged earlier, a major crash of the kind is what is necessary for the altcoin boom to come up. Another popular commentator thinks that BTC had to slide extensively to make the holders move away from it and shift their focus on various altcoins.

As hard as that is to imagine, nobody should forget that it was just last week when all the coins were in the green. The tides can change instantly in the cryptocurrency market.