TRX Bulls Look Ahead For a Crucial Resistance – A Bullish Confirmation 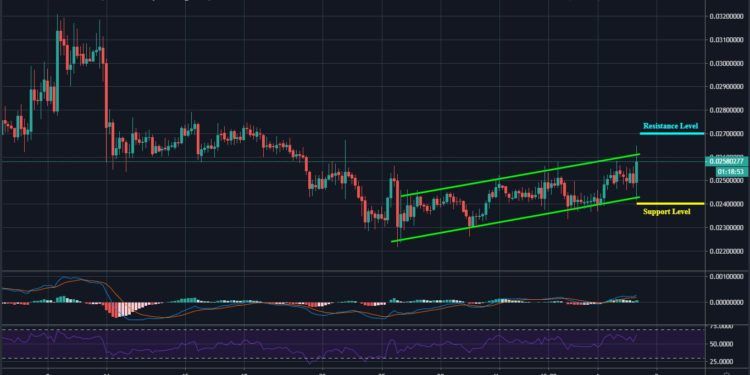 Against Dollar market, Tron has been following a slow upward movement since late April gaining an approximately 5% during the course of trading. Pairing Bitcoin, the market has remained in a bearish trend for over weeks as we may possibly witness a positive move in no time.

The long-overdue market seemed to have reached its low as candle formations revealed in a buying momentum. Gradually, Tron’s trading volatility is still low as price follows an ascending channel. Rising from $0.023 level, TRX is channeled towards an immediate resistance level at $0.027. However, the positive move has been revealed on the important RSI indicator.

For a retracement move, the market may be supported at $0.024 level and if the price drops below the above level, there’s another support around $0.022 level. More so, the next key resistance above $0.027 level lies at $0.03.

With the current signal on the 4-hours MACD, TRX is trading at the positive level of the indicator after the April 11 sell-off which was reflected in the negative zone. At this moment, we can say the market is gaining recovery.

From a structural perspective, Tron has remained on a downtrend since the market crossed the important 50-day moving average, the yellow line on April 11.up till this moment, TRX is still trading below the yellow line; revealing the significant decline market.

As it appeared on the 4-hours MACD, the slow rise is playing out which may eventually reflect in the market. Breaking the important yellow line is a lead for an upward movement. In case such a scenario unfolds, the nearest resistance level for a possible incline is 450SAT and beyond.

If the price is rejected, the next rally is likely to sit around the 380SAT level. On the 4-hours RSI, the market is raised above the 50 level; indicating that a bullish move is more likely to play out for Tron against Bitcoin market.