EOS Reaches a Rejection Level, a Bounce or Break Is Expected 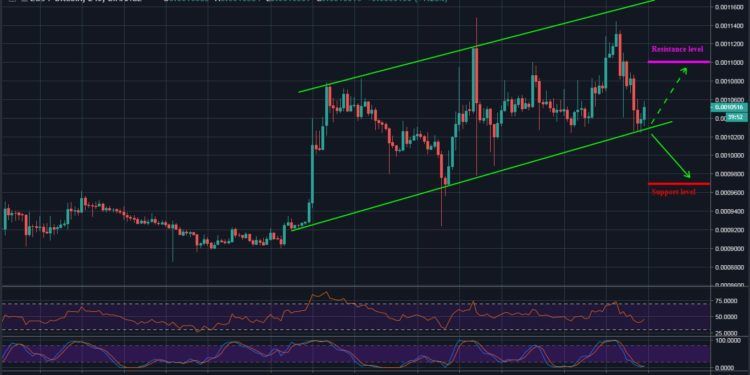 Since late March, EOS has been climbing slowly until the last week surge experienced which revealed the token in a more significant upward move. Today, EOS has reached a trend line as a break or bounce may send price to the next level. In the last 24-hours of trading, EOS market losses -10%.

From a medium-term perspective, EOS is revealed trending higher and obeying an ascending trend line (in green); following the late March positive move which lasted to $6 before a current drop reaches $5; testing the green trend line.

A test at the mentioned price level could possibly rebound price to retest $6 resistance level.
Before the scenario, EOS had followed a side-way move with choppy price action. The 4-hours Stochastic RSI is shown at its lowest level. Meanwhile, the 4-hours RSI is leveled at the 40 line. There’s still more room for a decline.

If the token manages to break-down the green trend line, there’s a high tendency for a fall. A bearish move is more likely to drop trade at $4.5 support level and below. EOS may pose for a bear-run. Nevertheless, the bulls still appeared to be gaining momentum for now.

EOSBTC market appeared to be maintaining a bullish channel formation after reversing from a low of 90000 SAT level in late March. A look at the current market reflected a bearish test at the 10300 SAT, lies the lower trend line. A potential buying pressure is expected to visit resistance levels at 110000 SAT and 115000 SAT, atop the trend line.

The 4-hours Stochastic RSI revealed a possible incline; resting at the oversold territory.

Respecting the rising channel, a short move could probably slip price to 97000 SAT support and beyond. Since April 2 rise-up, the medium-term RSI has been notably leveled above the 40 level. A fall, however, could slump the token in a bearish condition. However, a break above the channel may pose EOS for a monthly high.