Litecoin Waits For Bitcoin’s Next Move. Which direction? 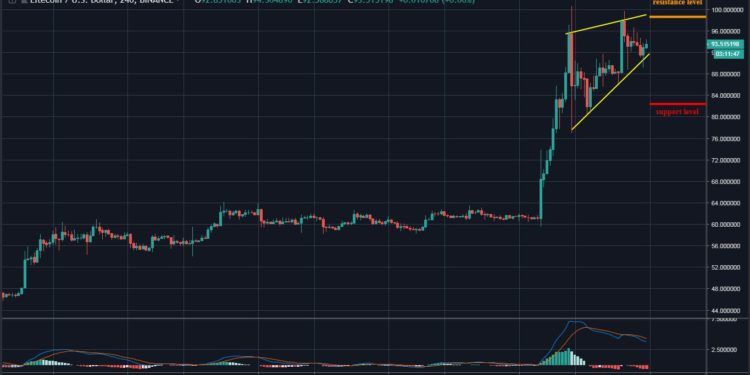 Despite Ethereum and Ripple’s moving against Bitcoin, Litecoin is ranked fourth and has chosen to follow the leading cryptocurrency since the recent surge in volatility. The correlation move has popped up LTC price with 69% in the last five days of trading. The next direction is yet unknown for Litecoin markets.

Throughout last month, Litecoin’s trading was below $62 owing to the market stability and volume size. Earlier this month, LTCUSD saw a heavy price increase after crossing a strong resistance turned support level which set a new high at $98. The price shift was driven by the sudden surge in Bitcoin’s price. Yesterday, the Crypto-asset retested the above resistance after a retracement. Now, the 4-hours MACD is revealed on a downward move.

As Litecoin trades at around $91 price level, a significant decline may possibly retest key supports at $82, $87 and $78 subsequently; once the trend line is broken down. A possible rise, however, could propel price to a quick resistance at $98 before a further surge up. As it stands now, LTC may witness a medium-term bearish trend before another bull-run.

Before the crypto market experienced a shock wave last week due to Bitcoin price increase, LTCBTC recorded a low at 0.0132 BTC and spiked to around 0.019 BTC high. Litecoin dropped a bit and retested the established resistance area at 0.019 BTC; now slowly dropping. A slope move is reflected on the 4-hours MACD; signaling a divergence move. Possibly, LTC may set a new low this week if price oscillates below the zero level.

On the other hand, a new resistance could be created at around 0.021 BTC level if this pair follows a bullish formation; surpassing the last week high. From all indications, LTC is most likely to correct to the previous support area at 0.015 before another buying pressure. However, the 0.0165 BTC remains a strong demand level for the sellers to breach.