ETH Remains Within a Channel Formation, a Breakout Could Play Out 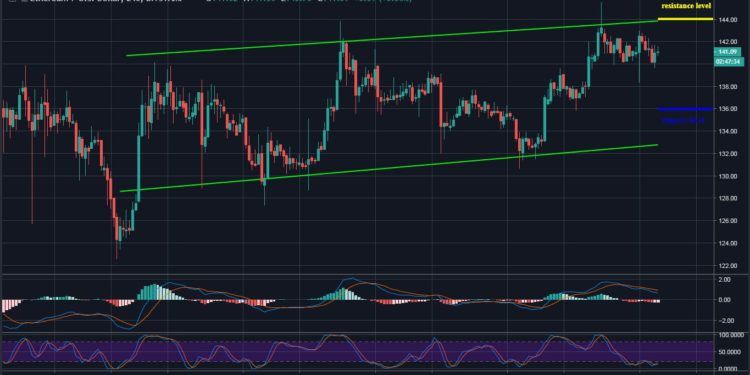 For ETHBTC market, the sellers have been more active and dominant in the past weeks, unlike ETHUSD which has been maintaining an upward direction. Both markets trend in the opposite direction and still following a channel pattern. However, a surge in volatility could be experienced in the coming days of trading.

Ethereum market follows a medium-term bullish sentiment after recording a low near $122 before carving an ascending channel. The positive move is evident on the 4-hours MACD. The buyers are actually gaining dominance. As of now, it appeared the market is about to take a short move.

On Saturday, Ethereum signaled a sell trade with a bearish pin bar after a touch at the upper trend line. A swing low is more likely to test $136 and $132 support level, where the lower channel lies. A drop below the channel should find support at $128. The current 4-hours Stochastic RSI suggests a buy. An upward move would meet an immediate resistance at $144. A breach up could send the token to $148 and $152 resistance levels. However, ETH trading remains within the trend lines for now.

As appeared on the medium-term outlook, Ethereum has been trending downward since early March as a result of supply force the market is experiencing. The 4-hours Stochastic RSI has reached the oversold territory: suggesting a long move. A possible push is likely to hit 0.034 BTC resistance level.

Trading within a channel, ETHBTC is now approaching a close support level at 0.0335 BTC; where a bounce up is expected. As the crypto-asset respects the trend lines, there’s a high probability for a change in trend which could possibly result in a price break. However, a break-up on the channel could meet resistance levels at 0.036 BTC. A break-down on the channel could also provide supports at 0.035 BTC. Picturing the 4-hours MACD, ETH is still revealed at the positive zone.