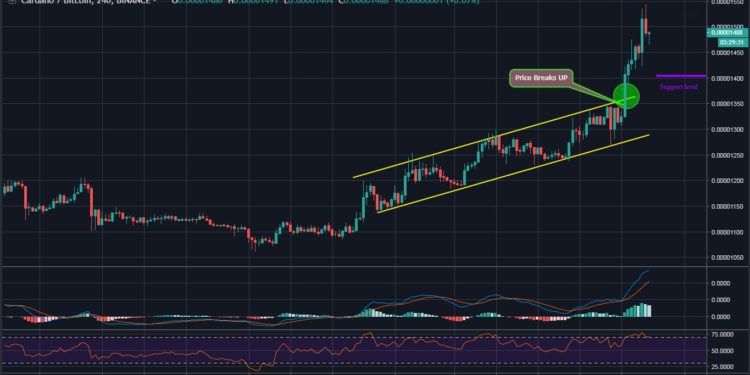 Ranked tenth above Tron, Cardano had gained roughly 50 percent in the past three weeks following the monthly significant positive movement. Today, ADA is trading at $0.06 price level. Considering the current rise-up, the token has recorded a market cap valuation of $1.5 billion and an estimated volume size of about $158 million with a 24-hours surge of 6.73 percent.

Cardano performance in the crypto market has been quite an interesting moment for traders since the beginning of March with a weekly high at $0.0627. The bullish move was notable on the 4-hours RSI as it reverses direction. As of now, the buyers are in control of ADA market as the sellers struggle along with the impulsive momentum; waiting for bullish exhaustion.

Notwithstanding, a bearish retracement could drop price action to the previous support level at $0.056 and probably $0.052, respecting the ascending yellow trend line. A continuous fall could result in a trend reversal; breaching the yellow line. Meanwhile, the next incline could surface at $0.064 and above. Still, Cardano remains at the positive zone on the 4-hours MACD.

For the past three weeks, ADABTC has been following a higher high, higher low pattern; slowly moving within the range of the yellow trend lines after a bounce up from 1070 SAT low. The bigger picture is clearly revealed on the 4-hours MACD.

Yesterday, Cardano saw a strong surge above the ascending channel which sends price high to the near of 1550 SAT area as trading currently holds at around 1480 SAT price level. As appeared on the 4-hours RSI, a possible pull is likely to hit a low at 1400 SAT, 1350 SAT and 1300 SAT support levels.

Seemingly, an upward move could propel the token to a high of 1600 SAT resistance and beyond. Nevertheless, the position of the market remains in the bull dominance.

Cryptovibes.com is not a financial advisor. Do your own research before investing your funds in any financial asset or presented product or event. We are not responsible for your investing results.