Burglar Bashed Through the Glass to Steal Bitcoin ATM (Video)

Images captured from the security cameras indicated that the guy used a sledgehammer to break the glass door of the bakery. 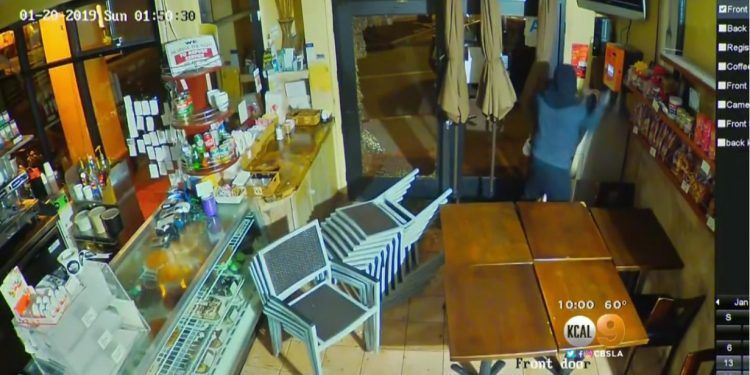 It is quite natural that the owner of Belwood Bakery, Derek Tran’s family, is concerned about the repeated attempts made by bitcoin burglar in the recent weeks. Coming in as Vietnam refugees and settled in Brentwood Village, the owner is running a small business though it is located in the popular village in the United States. The incident suggests the increasing popularity of the emerging asset class around the globe.

On January 20, 2019, a burglar has attempted a break-in and went straight for the currency. Unfortunately, for him, it was not the cash machine that is used, and it was none other than bitcoin. Images captured from the security cameras indicated that the guy used a sledgehammer to break the glass door of the bakery owned by Derek Tran family. Then, the man tried to go straight to a bitcoin machine that was placed on the wall above the ATM.

On top of that, the man tried to open the machine by hammering it continuously. However, his attempts failed to yield the expected results thus forcing him to leave the bakery. Narrating the incident, Derek Tran said that it scared neighbors and workers. He fears that this type of incident could happen at any time in the upcoming periods too. His concern is also based on the previous attempts made by burglars, and the latest was the third attempt. On November 18, a group of crooks attempted followed by two young men with hoodies made their attempt on December 21.

During the first two break-ins, burglars have failed in their attempts while the third involved in the ATM machine and the bitcoin machine leasing space. David Paul Tran, the owner of the baker, told the media that he was

“so concerned about the ATM machine, I tell them to take it off. Don’t need to put any money inside the store.”

He could not confirm or deny whether there was any cash in the bitcoin machine that was stolen in the third attempt.

Tran pointed out that:

“A lot of labor man, hard labor, hard blood, sweat, and tears. It’s a hard hustle man. And we do it every day.”

Therefore, he believes that if someone comes like this and ruin, it is tough for them to come back. The incidents throw the increasing popularity of digital coins while at the same time raises the question of security issues.

The number of Bitcoin ATMs are growing every day in the United States. This is mainly the result of the State Department of Financial Services rule on November 1, 2018, that has given its approval for a virtual currency license to Coinsource Inc., thus providing the machine operator to implement more than 40 Bitcoin Teller Machines in and around New York City. It means, that New York residents are now able to acquire bitcoin or sell it in exchange for fiat currency at kiosks very similar to ATMs around the city of New York.

This business model and a specific regulations inspired other companies to consider to bolster such services in other local areas of United States. According to coinatmradar.com, there are 4228 bitcoin ATMs in the world and more than half of these are in the United States – 2550 locations.