Jamie stated that he does not take any pleasure in seeing the prices take a short-term plunge as he had already predicted that they would. 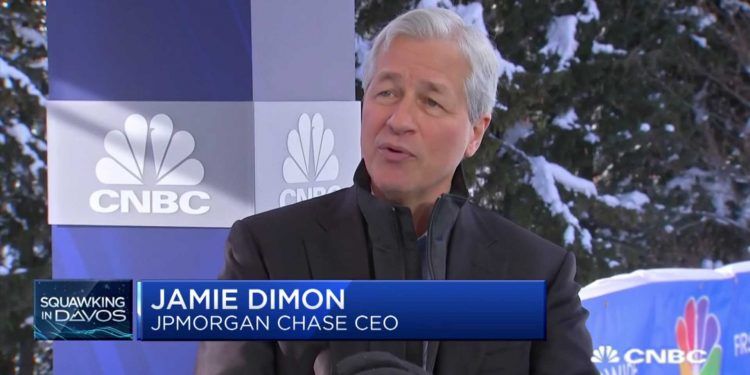 There are various prominent individuals who loathe bitcoin and have been publicly vocal about it in the past. One such person is the CEO of JP Morgan Chase, Jamie Dimon. The BTC price bubble has burst but he is strangely not celebrating it after calling the largest cryptocurrency a fraud in the past.

Jamie stated that he does not take any pleasure in seeing the prices take a short-term plunge as he had already predicted that they would. He had warned investors that if they were stupid enough to buy bitcoin, they would pay the price one day in future.

Speaking with CNBC’s Squawk Box at the 2019 World Economic Forum in Davos, Switzerland, the CEO confirmed his preference for the blockchain technology over cryptocurrencies especially Bitcoin.

No ‘Celebration Dance’ after Bitcoins 80% Plunge

Although Jamie had promised to never discuss anything related to Bitcoin ever again, he was prompted to comment on the matter. He explained that he is not a self-indulgent sadist who would find pleasure in the miseries and losses of other investors who chose to invest in Bitcoin in late 2017 and all through 2018.

Jamie also stated categorically that he did not take any satisfaction of being proven right about the cascading plummets in the bitcoin prices. The CEO has commented distastefully about the crypto world in the past with the most notable outburst coming in September of 2018 when he called bitcoin a fraud. During the outburst, he also threatened to fire any of his employees found to be trading the cryptocurrency.

Later, JP Morgan was accused of illegal market manipulation after it was discovered that it was among the biggest buyers of a bitcoin tracker fund dubbed Bitcoin XBT. However, none of those allegations were substantiated.

Jamie has been on the record saying that he did not want to be a spokesperson against bitcoin which he confirmed in Davos. He said that he wishes no ill on investors whose investments in the largest crypto are yet to pay off and those who have lost money in the process.

The Blockchain is Better than Bitcoin

Having said that he wants nothing to do with bitcoin, for now, Jamie went ahead to advocate for its underlying technology, blockchain. In spite of the technology’s high levels of corporate hype, the CEO thinks that it is yet to become an ideal solution to disrupt things like equity trades.

He sees blockchain as a better replacement for various online databases that need to remain updated at all times and accessible to everybody who needs some information from them. JP Morgan is already using this technology that enables the bank to get rid of third-party intermediaries. It developed an open record of all transactions on a network that is permanent.

Currently, buyers and sellers can interact directly and have all the exchange activities recorded on a ‘distributed’ or blockchain ledger. Critics think that Jamie prefers blockchain safe and manageable. On the other hand, bitcoin is potentially disruptive, world-changing, and a potential threat to the existence of traditional financial systems and institutions like the JP Morgan Chase Bank.