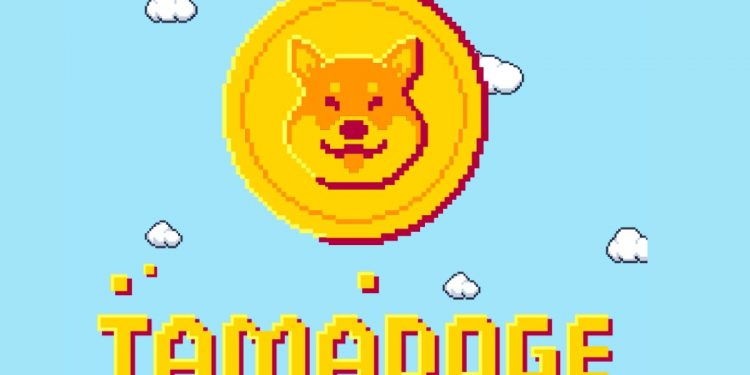 Tamadoge, a Play-to-Earn (P2E) metaverse meme coin, has raised $2 million from investors in around two weeks since its beta sale started. Two hundred million tokens were sold in the beta sale phase, raising $2 million – 1 TAMA sold for 0.01 USDT (Tether stablecoin, which is equal in value to 1 USD).

One billion TAMA tokens are now available all together in the presale, reaching around half of the total supply. The speed of buying is picking up. The project raised $750,000 on August 10.

The presale will now continue with a succession of token sale tranches of 100 million each – the token price surged by 0.0025 USDT with every tranche. By the end of the presale, the TAMA token price will be 0.03 USDT, which is three times the original beta sale price of 0.01 USDT.

Notably, the next – second – phase of the presale, after the beta, sees 1 TAMA priced at 0.0125 USDT, raising an extra $1.25 million towards the target of $19 million. Excitement has been growing over the past several days as buyers piled in to beat the imminent 25% price hike.

Nevertheless, since the escalating schedule of price surges has been revealed, prospective investors familiar with the matter are more incentivized to make buying decisions to beat the price surges.

There is a low minimum purchase amount of only $10 and no maximum. Early investors are also probably attracted by the fact that there was no private sale and there is no vesting period for presale participants.

Within a space of two weeks, Tamadoge has created a user base of 20,000 for its Telegram group and has so far racked up around 38,000 followers on Twitter. Furthermore, in a bigger boost for Tamadoge virality, it has unleashed a $100,000 giveaway airdrop referral program.

Although meme coins were believed to have had their day, Shiba Inu and Dogecoin are yet to fade away as some thought they might.

Interestingly, things have moved on apace in the crypto space. While SHIB and DOGE keep struggling to remain relevant, aiming quite late to bolt on the different rushed utility features, Tamadoge is designed out of the box to become a compelling game with a powerful business model to push revenues and engagement.

The game’s platform is set up around the idea of nurturing a virtual Tamadoge Pet, which gamers mint, breed, and battle. While leveraging NFT technology, every pet comes with distinct traits and their owners feed and clothe them by buying provisions at the Tamadoge Petstore.

The more care gamers give their pet, the more rewards – Dogepoints – the player earns, as they help their infant pets mature into adulthood and surge on the leaderboard.

Tamadoge solves the issues encountered by earlier play-to-earn games like Axie Infinity. Since its economy is deflationary and the game is fun to play and affordable to enter, a prospective gamer does not end up in the position of having to ‘pay to play’.

For example, unlike with Axie Infinity, there is no need to pay anything to become a ‘scholar’, where you are compelled to hire someone else’s nonfungible token to get in on the action. The Tamadoge NFT Petstore and the battling leaderboard are scheduled to be released in the fourth quarter of 2022.

Persistent rumors to the effect that Elon Musk may be dabbling in the Tamadoge presale refuse to go away. Also, unverified allegations continue to swirl, indicating that Tamadoge may have some seasoned backers on board who are already having successful meme coins under their belt.

Whatever the truth of these claims, the metaverse narrative that informs the value differential of Tamadoge’s network – or Tamaverse – might enable the meme coin to gain traction with crypto investors.

The roadmap consists of augmented and virtual reality milestones and the project is seeking to partner with metaverse partners early next year and to have the 3D rig-up of the Tamadoge pets metaverse-ready later in 2023.

A future listing on the Hong Kong-based LBank exchange has now been confirmed, with more CEX listings now being lined up. Here is where you get started with the presale. Notably, the TamaDoge contract address is: 0x12b6893cE26Ea6341919FE289212ef77e51688c8.