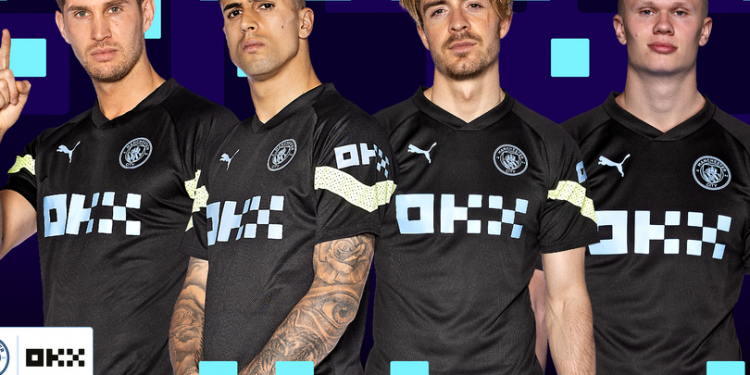 Manchester City partner OKX, a crypto exchange platform, will feature on training kits for the 2022/23 season that kicks off next month.

The football club has extended its partnership with OKX by confirming the crypto exchange platform as the new training kit sponsor.

Earlier in the year, the club named OKX as their first “official cryptocurrency exchange partner” in a multi-million-pound contract, and have moved to boost the relationship this summer. Apart from sponsoring the club’s trophy tour, OKX has invested further with another seven-figure sum to feature on the training kit for the men’s and women’s teams for the 2022/23 campaign.

OKX now replaces Expo 2021 Dubai on the front of the training kit that had itself taken over from previous partner MarathonBet in the past season before the betting firm placed itself on the wrong side of Russia’s invasion of Ukraine.

As part of the latest deal, OKX has commissioned murals of Joao Cancelo, Erling Haaland, John Stones, and Jack Grealish across four locations in Manchester. Each of these murals will have a QR code that fans can scan for the opportunity to win a season ticket in the sponsor’s hospitality box.

There remains uncertainty and unease around football clubs involving themselves with crypto outfits given the nascent sector is still unregulated, while their markets have been considerably dropping this year. Manchester City has already been embarrassed when they had to rapidly terminate a deal with a firm that it was quickly discovered was not what they were presenting themselves to be.

Nonetheless, that has not put the club off getting more buy-in from OKX and both sides are open to further deals in case they continue to be happy with their partnership.