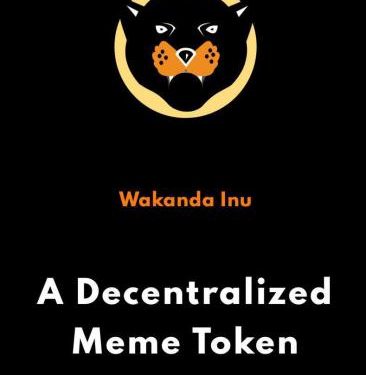 Wakanda Inu ($WKD) was launched earlier this month becoming the first African meme token globally. It is built on a mission that is meant for charity work. Resembling the other meme cryptos like Shiba Inu and Dogecoin, this utility token aims to gain mass adoption in the highly populated decentralized finance (DeFi) sector.

Its first token sale happened on November 6 making Wakanda Inu the latest player in the majorly competitive crypto sector. The team described it as a “charity-oriented meme token that is entirely for social good across the globe”, trial to make it a mainstream asset that has real-world utility, mostly for the global nonprofits.

But, financial analysts are now speculating on the viability of the token. Although it has so far gained significant trade-in decentralized exchange, PancakeSwap, and 11 other marketplaces in Asia and Africa, crypto investors are still hesitant to mine this meme coin due to its inherent parodical nature.

Sabii of Amber JC Lou Integrated Limited, a major African exchange, is scheduled to list WKD soon as stated by their spokesperson. Cryptos like Bitcoin launched as a new way of community trading. Operating majorly on blockchain technology, cryptos were designed to give power back to the common person.

Due to its decentralized structure that enabled complete transparency in all transactions, many people have been investing in the crypto world. Since tokens were mined and traded without any regulator, users were assured a majorly reduced risk of fraud.

The developers of the other tokens started to come up, featuring meme tokens that comprised of popular internet avatars like the Doge and The Black Panther thriving in his country of Wakanda.

Nonetheless, Wakanda Inu has got strong backing from among the high-risk investors. When it was introduced, it generated a diluted market cap of over $300 million, with 80,000 $WKD holders in one week and growing rapidly.

The developers of this new token think that its original success is not a one-off occurrence and they expect it to improve in the market viability in the coming months, mostly since the token has adopted a 4% smart contract that supports different charities.

Based on its white paper, $WKD started as a community meme project that represents the daily struggles and aspirations of every person. By integrating the spirit of the community, or Wakanda, the token aims to bring together people from various backgrounds under one unified flag.