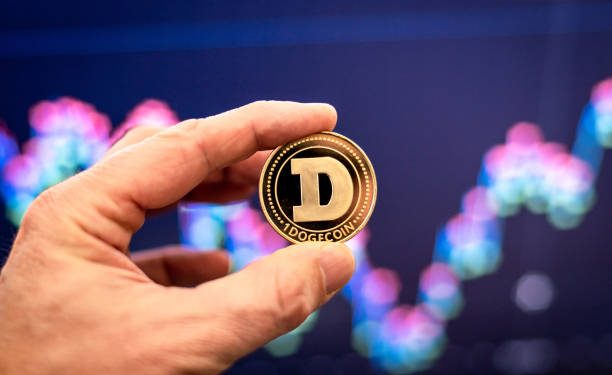 Market data shows that relatively few hands are moving huge amounts of DOGE. It has been a Dogecoin day on May 5 as the crypto continued its assault on the crypto market listings. The meme coin ‘flippened’ XRP to become the fourth-biggest crypto by implied market cap, after surging to reach an all-time high of $0.69.

The latest all-time high was the price target that was set by traders on social media. Nonetheless, crypto’s latest media darling may not be as wholesome as it appears. For all that hype that is surrounding Dogecoin, and its de facto master Elon Musk, publicly available data reveals that only a few people are using the blockchain.

Notably, the few people using the blockchain are accounting for an incredibly huge portion of its general activity. Notably, the dollar value of the coins sent across the Dogecoin blockchain on May 4 surpassed $58 billion. This figure was 70% higher than the amount transferred on Bitcoin (BTC) $34 billion and around 260% higher than on Ethereum (ETH) $16 billion.

Exploring on-chain data further it is clear that despite Dogecoin moving a higher value of coins than the two biggest cryptos in the world, it achieved all that with a small fraction of their transactions.

When looking at DOGE’s average transaction value on the day in question, it reached nearly double the value recorded for Bitcoin. The average Dogecoin transaction value stood at $800,000 compared to $420,000 on BTC.

Its statistics compared to Ethereum paint a more dire picture; Dogecoin’s average transaction value surpassed Ethereum’s by 8,000%, despite processing barely 5% of the number of transactions. 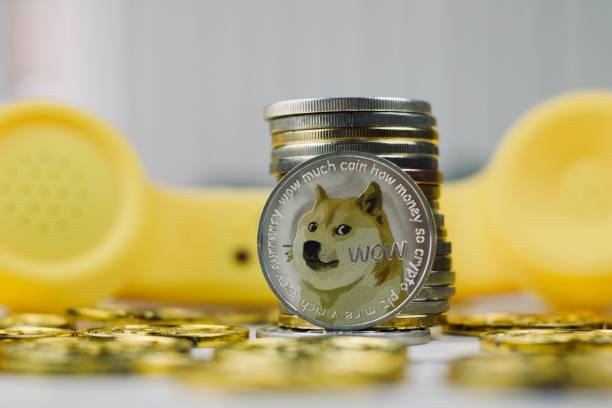 Combining that information with the long-standing reality that one single address holds around 28% of all the coins that exist; while only 12 accounts control 67%; it becomes clear that DOGE is not exactly the people’s champion that interested parties would have the general public believe.

A report that was published recently by Galaxy Digital piled on the misery about DOGE’s general lack of authenticity as a real crypto project. The report, titled “Dogecoin: The Most Honest Sh*tcoin,” highlighted the fact that Dogecoin’s Github repository has not been touched since 2017. The repository is the place where the updates to the blockchain’s code are logged by the developers.

Moreover, the number of entirely synced nodes is about 26% of the general node count. Synced nodes are computers that run copies of the Dogecoin blockchain. This suggests that few people are willing to make the effort to maintain the blockchain’s network security.

Although the dogehouse appears to be a ghost town, the mindblowing reality remains that DOGE is the best-performing digital asset in the crypto space currently. This coin recorded 14,000% growth since January 1, when it was priced at a fraction of a cent.

Both credit and blame for DOGE’s somewhat irrational ascent have already been placed on the ‘Dogefather’ himself, Elon Musk. Musk took great pleasure in posting Doge memes to his 52 million followers on Twitter in much of 2021.

Nonetheless, it should also be made clear that the coin’s recent surge to $0.69 is the same price target that was set by Reddit traders intent on artificially pumping DOGE’s valuation. This price point was originally intended to be reached on April 20. That would have been a joke on top of a joke on 4/20 day.

At the time, DOGE managed to reach a price of $0.420. But today, a little more than two weeks later, it has achieved its jocular goals. The eventual price point being pursued by the traders is one dollar. 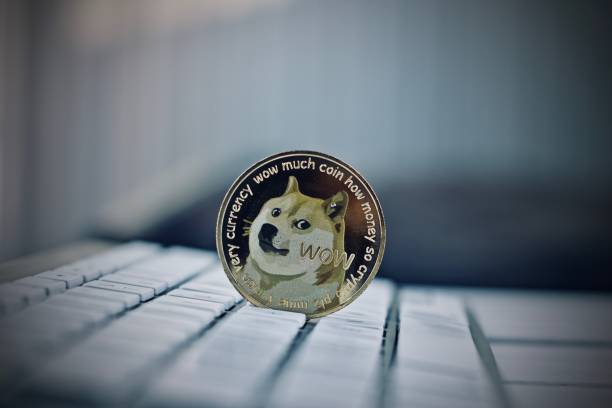 If additional evidence is required to ensure that the markets are not always rational, no more than this year’s GameStop pump, where the share price of an almost ‘dead’ brand increased by more than 9,000%. The Galaxy Digital report stated:

“Dogecoin has always been a joke, and the joke keeps getting funnier.”

The head of firmwide research at Galaxy, who is also the author of the report, Alex Thorn, did praise DOGE for its lack of pretense, noting that the coin’s fortunes were not tied to foundation announcements or developer promises and that its key goal was to elicit a reaction. Thorn ended:

“Dogecoin’s longevity is ensured so long as one truism remains: people love a good joke.”

Dogecoin is undoubtedly surging and Bitcoin appears to be limping. However, one analyst now thinks that this week will burst the DOGE bubble. In a series of May 4 tweets, popular Twitter account ‘Lowstrife’ mentioned the similarities between Dogecoin and XRP among warning signs that the ‘end’ is nigh.

Based on previous reports, DOGE has continued to surge this week, reversing the past losses to take out its previous peak of $0.47. based on the year-to-date data, the pair is up more than 7,000%.

With DOGE’s major proponent Musk expected to make his promised appearance on Saturday Night Live in the capacity of “The Dogefather” on May 8, nonetheless, the date is rapidly becoming a line in the sand for the meme-based altcoin’s fortunes.

Why tf does @elonmusk going on Saturday Night Live create the scenario to push DogeCoin to $1.00. Somebody please help me understand this logic?

Elon Musk has made headlines throughout the year for his adoration of Dogecoin and fueled acceptance of its gains as being based not on merit, but the viral effect of memes. But if the tide turns, the bagholders might face the type of losses reminiscent of those that followed the end of the 2018 altseason.

For one pseudonymous cryptocurrency trader Lowstrife, there are signs of an apocalypse that are already visible on the spot market. Lowstrife commented:

“Each of Doge’s major rallies this year has been smaller and less aggressive. What took 18 hours at first has been ongoing for 2 days now. I suspect this is the final push before it’s all over for good. May 8th is the day to watch.” 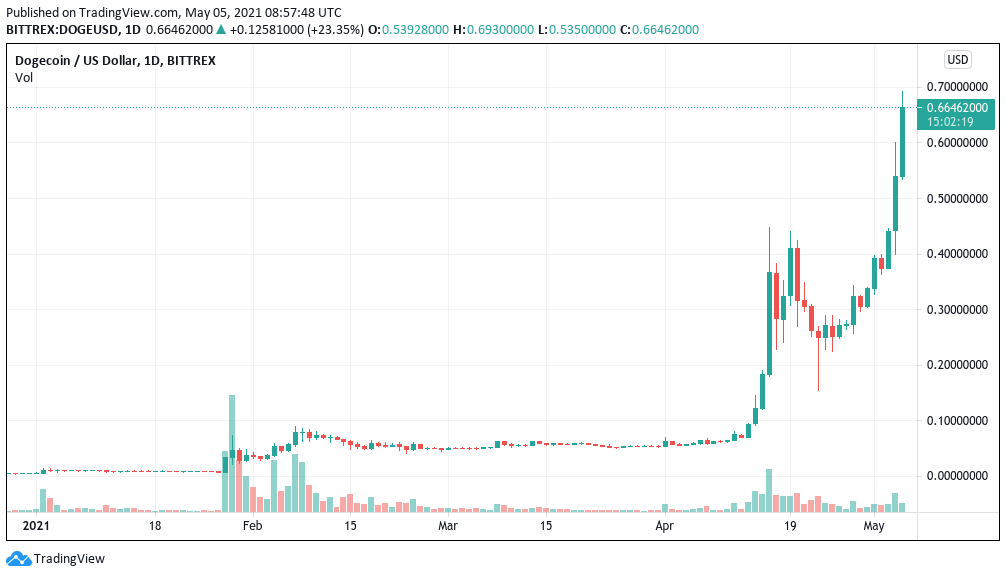 The latest phase of the DOGE miracle is majorly similar to the final push of Ripple’s XRP in 2018 before XRP hit its still-valid all-time high of $3.20. later on, it was seen that the crypto gradually faded to drop to lows of $0.14 representing a loss of around 95.6%. 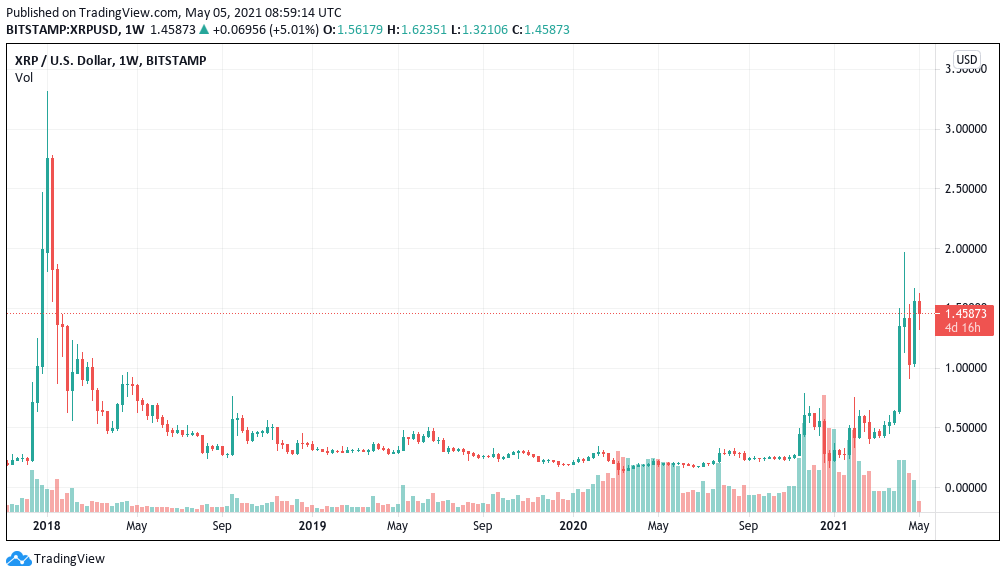 Today’s situation is all quite familiar for the newer market participants. The GameStop debacle where individual traders pushed the price of the stock to crush short hedge funds, created fertile grounds for a copycat move in crypto.

Unlike the stocks, there are no ways available yet for the regulators to exert some pressure on traders or restrict access to the asset itself, other than by compelling trading platforms to do the work for them.

Adam Back, CEO of Blockstream, while explaining the phenomenon, stated that the DOGE bull run was an example of a casino-like market. He argued on Twitter:

“Like a GME short-squeeze. Not because the market agrees it has value, but actually opposite because it’s rightly shorted as being devoid of value. The more of a joke, easier to pump, whatever people will rally around a group pump and dump casino rug-pull.”