Polkadot (DOT) digital asset has set a new all-time high of $12.86 on January 14, 2021 – Binance rate. With that new milestone, Polkadot has surged above Litecoin to take the position 5 spot on CoinGecko and is only $2.309 Billion away from taking XRP’s number 4 spot.

To replace XRP on the 4th spot, Polkadot must be valued above $14.50. Checking out the daily DOT/USDT chart shows that such an achievement may be possible if the current momentum in the DOT market continues.

For starters, Polkadot’s trade volume is very much in the green with the daily MACD rising past the baseline in a bullish manner. Moreover, the MACD’s histograms have just turned green which indicates that DOT’s bullish climb may continue. 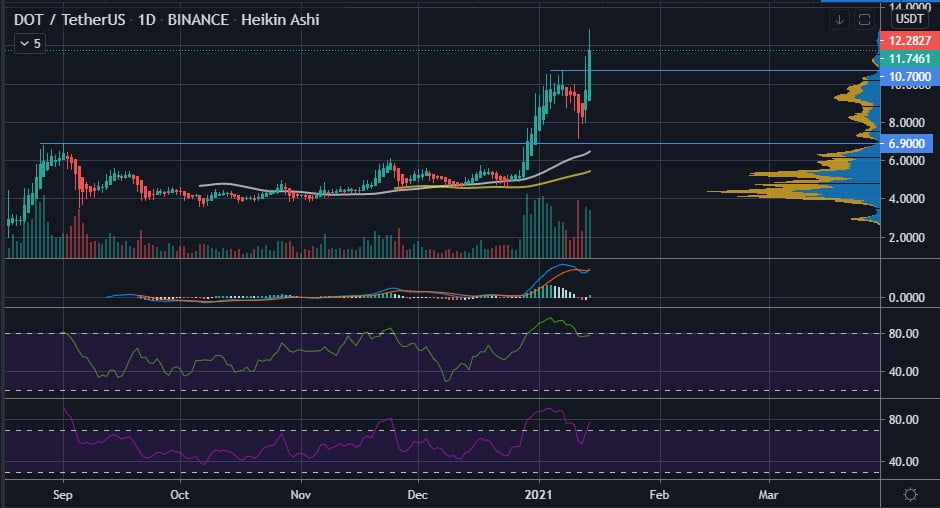 Also, the daily MFI and RSI are in the slightly overbought zone of 76 and 77 respectively. Nonetheless, the crypto markets are now experiencing growing bullish momentum due to bitcoin’s rally that is hovering near $40,000 at the moment. The general bullishness may translate to Polkadot continuing on a bullish climb towards higher levels.

Analysts and commentators believe that  $10.70 should offer a support zone for Polkadot. As it is the analyses of altcoins like DOT, investors and traders are reminded that parabolic movements like the one formed by Polkadot normally end with a steep correction.

Such a correction was seen after Polkadot set the previous all-time high of $10.70. That zone should offer some level of support if Polkadot does not surge higher.