On December 28, 2021, the gold prices rallied by around 1% after President Trump signed the $2.3 trillion bill that has $900 billion of pandemic relief aid. The other $1.4 trillion is government spending money to fund various federal agencies. That now removes instant uncertainty and supports the distribution of checks and loans to small businesses and individuals.

Also, now there are funds to help in the vaccine rollout activities to counter the impact of the COVID-19 pandemic. In that context, gold gained 1% to hit the $1900 level before giving back some of these gains. The risk assets rallied widely after this news broke out.

Although the United States Congress passed this stimulus package as early as December 21, President Trump refused to sign the bill, and that created much uncertainty over the past week.

Sentiment then improved and the US dollar plunged to a one-week low of 90.10 and seemed set to continue with that downward trend. The DXY US Dollar Index and gold historically exhibit a negative relationship, with a correlation coefficient of -0.78 in the last 12 months.

The current macro environment seems to favor precious metals as governments and central banks remained quite committed to financial support and monetary easing as the health crisis continues to evolve throughout the world.

New types of coronavirus strains discovered recently suggest that more time is required for an economic recovery in case the vaccine development fails to catch up with the pace of viral mutations and speed of spread. 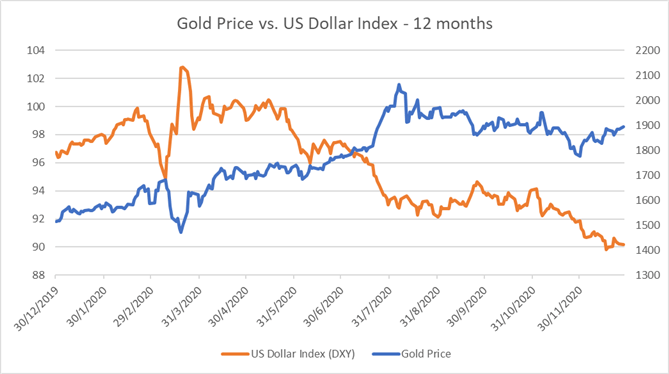 Based on technical analysis, gold seems to have already broken above a ‘Descending Channel’ that formed in early August. Since then, the prices have formed higher highs and lows which is an encouraging pattern that points to a possible medium-term trend reversal.

The IG Client Sentiment shows that the retail gold traders are shifting heavily towards the long side; 82% of the positions are net-long while just 18% are net short. Notably, the traders have trimmed both long (-1%) and short (-2%) positions during the night. This data compared to a week ago, the traders have indeed reduced long (-1%) exposure slightly and slashed short (-14%) bets.

Oil managed to par some of its losses from earlier on December 28 after President Donald Trump signed the $2.3 trillion COVID-19 aid and spending package. However, lingering fears about the short-term demand for oil weighed on the market sentiment.

“With President Trump signing the bill, oil has quickly recouped most of its losses today, although both Brent and WTI remain modestly in the red.”

The US president’s decision to sign the package was cheered as it would effectively restore unemployment benefits to the millions of American citizens and avoid a federal government shutdown. Halley added:

“With trading volumes thinned by the holiday week, oil is likely to remain below the radar in coming days. That said, the signing of the U.S. stimulus bill, with the possibility of increased size, should put a floor under oil prices in a shortened week.”

However, the new highly infectious variant of the COVID-19 that was first discovered in the UK has resulted in mobility restrictions being reimposed. The new virus strain has also been discovered in several other countries which have fueled worries over oil demand recovery.

Interestingly, the oil market may be taking cues from the pandemic situation as it continues to develop in the coming days. The chief global market strategist at Axi, Stephen Innes, said in a note:

“With the world now urgently launching mass vaccination programs, the near-term fate for the oil market might be how quickly vaccines can close the gap in the race to contain the new variant. Any complication on the pandemic front, whether its vaccine logistical, or lockdown related, could be met with more selling as January oil demand is on less solid footings, especially if the virus situations worsen more than anticipated post-holiday, ultimately handcuffing lawmakers.”

If the pandemic is brought under control by the different vaccines available in the market, gold might plunge further while oil would gain. Whenever the market conditions are stable, investors go for the riskier assets as opposed to the haven assets. Thus, gold may have to wait a while longer before it retests the record highs.

On the other hand, if the new coronavirus variant proves to be problematic, governments may be forced to turn to lockdowns which would hurt the prices of oil and other riskier assets while favoring haven assets like gold. For now, everybody is watching the markets cautiously awaiting the next trend to form.