Bitcoin whales are not missing out on the party. BTC whale clusters show that $23,409 is a critical support zone. That means the current rally has a strong support floor. That zone has become a point of focus for the big traders. It means that the rally is underpinned by whales that continue to accumulate above $23,000.

In most cases, whale clusters form when the whales buy BTC and do not move their bitcoin holdings from the price of purchase. Clusters come in handy when determining bitcoin’s support levels, particularly when the market shifts speedily. 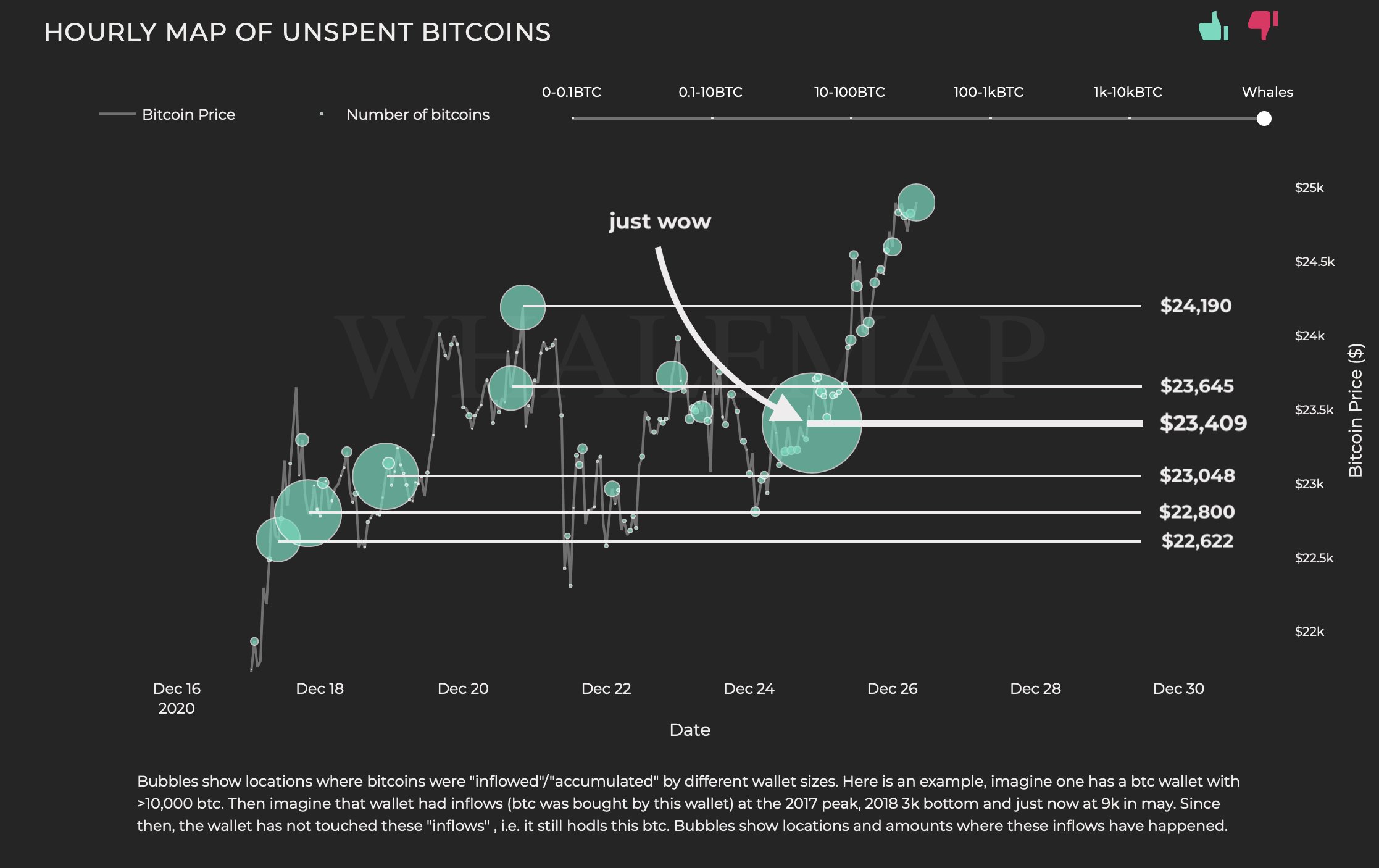 Analysts at Whalemap, which is a data analytics company that tracks BTC whale activity, said that the flagship crypto has formed a major floor between the $23,000 to $23,500 range. They stated:

“Surprisingly large amounts of losses were flowing on-chain at 19k prices. When this happens in bullish conditions BTC gives us nice rallies (10k–>20k last time). We have multiple strong supports at recent prices as well… Should not be going lower than $23,409.”

Bitcoin must develop strong support zones in a major bull run to mitigate risks of sudden corrections. If these whale clusters form at high price zones, like $23,409, then these whales might bid slightly higher and sustain the crypto’s momentum.

One long-time trader, Peter Brandt, focused on the parabolic line of bitcoin dating back to October as a major support area to watch. 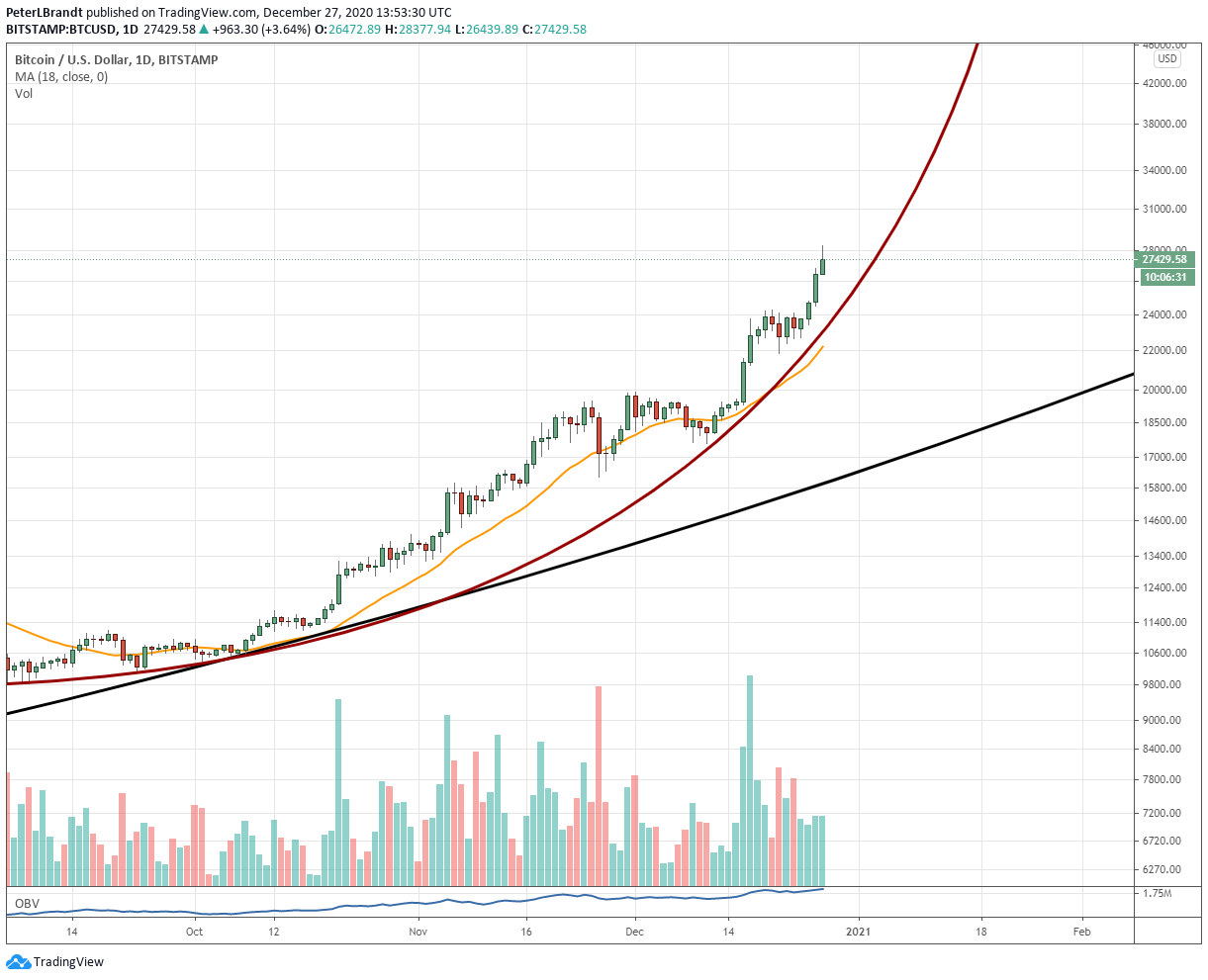 That line indicates that $24K is a critical support zone. It means that Bitcoin must remain above this level to prevent it from dropping sharply. Brandt wrote:

“Bitcoin $BTC is advancing in the parabolic move from Sep ’20 low. I expect this curve to be violated at some point, but not to produce an 80% decline. The green curve is a larger parabolic advance from Dec 2018 & Mar 2021 lows. This is the driver of the bull market.”

In the short term, the whale clusters coupled with the parabolic trendline indicates that $23,409 and $24,000 are the two support zones that the bitcoin bulls must defend for the rally to continue. Below these levels, chances of an accelerated correction increase, and that will become worse if the whale cluster support zones are breached.

Where Would Bitcoin Peak?

Traders generally think that BTC could rise to $30,000 and then $36,000. The latter zone has become a major near-term prediction since the options market shows a high possibility of $36,000 getting hit in the few months ahead. The $30K level is a key psychological level that may cement a bull run for the middle-term.

One pseudonymous trader, “Byzantine General,” said that he is convinced that bitcoin will top out at $30,000. He went on to explain that $30,000 is the “golden ratio extension” level. It also doubles up as the zone with massive sell orders on Bitfinex and Coinbase. He added:

“I think this rally tops out mid-term around 30k. It’s the golden ratio extension. Also happens to be where CB & Finex got fat asks laying around.”

On December 27, bitcoin experienced big volatility, which eventually ended with the crypto losing 6.5% within a few hours after it set a new all-time high above $28,200 across the major exchanges. Since the resistance areas with heavy sell orders can be met with huge pullbacks, the $30,000 psychological zone may present a major short-term hiccup for bitcoin.

If the coin manages to rise above that level, even $40,000 will likely appear on the horizon for the bulls to take.