Network upgrades, new partnerships, and a boom in DeFi activity are believed to have sent Ziliqa (ZIL) price on a major month-long rally. In November, bitcoin (BTC) and Ether (ETH) took the limelight as each of the coins surged to new yearly highs. Investors notably tend to focus their energy on the bigger cap altcoins.

This focused strategy leads to the smaller cap coins that reside away from the top-10 being ignored. For instance, Ziliqa has gained 69% in the past 30 days. However, despite this impressive performance, the altcoin has considerably under-performed Ether in the last six months.

The project was launched in 2017 by the National University of Singapore researchers. These researchers were looking to introduce scalability to smart contracts. Today, ZIL ranks 49 on CoinMarketCap ahead of well-known cryptos like Basic Attention Token (BAT) and Decred (DCR).

Decentralized finance (DeFi) might have fueled the recent surge. But, staking and governance voting by themselves do not seem adequate for a sustainable price uptrend. The project now needs dApps users adoption and total value locked to show some strength against the leader ETH.

The charts show how ZIL has under-performed ETH price by 42% in the last six months, despite its nominal price gains. Interestingly, Ziliqa’s design is based on sharding that enables parallel data processing that resembles the Eth2 proposal.

As the decentralized finance industry exploded with a new entry of users that seek high-interest returns from yield farming, it became quite clear that the sector needed more options to handle the surges in transactions and fees.

Ziliqa implements a modified version of the proof-of-work (PoW) consensus protocol and a proprietary programming language that is known as Scilla. Therefore, comparing its performance with the smart contract sector leader makes some sense.

April marked Ziliqa’s v.6.2 release that focused on memory, usability, and performance optimization coupled with support for staking. The latest version also changed the total number of Ziliqa-owned shard nodes from 520 to 250, a considerable increase in community participation.

After several months of expectation, the project finally said that it is staking in mid-June, including partnerships with Binance and KuCoin. These announcements were followed by a rally that brought Ziliqa’s highest price in Ether terms since April 2019.

Nonetheless, it was an instant hit with the investors and community who then staked over one billion ZIL in the first few hours. By October 15, at least 25% of the circulating supply had been staked.

This team also revealed governance voting that is another long-promised feature the entire community has looked forward to. The positive momentum of price recovery and announcements continued in October with the Pillar Protocol’s launch. Pillar is an algorithmic stablecoin dApp.

Zilliqa’s v7.0 mainnet update is set to happen on December 21 and this upgrade is expected to reduce storage use which will enable miners’ votes to be attached to PoW submissions. 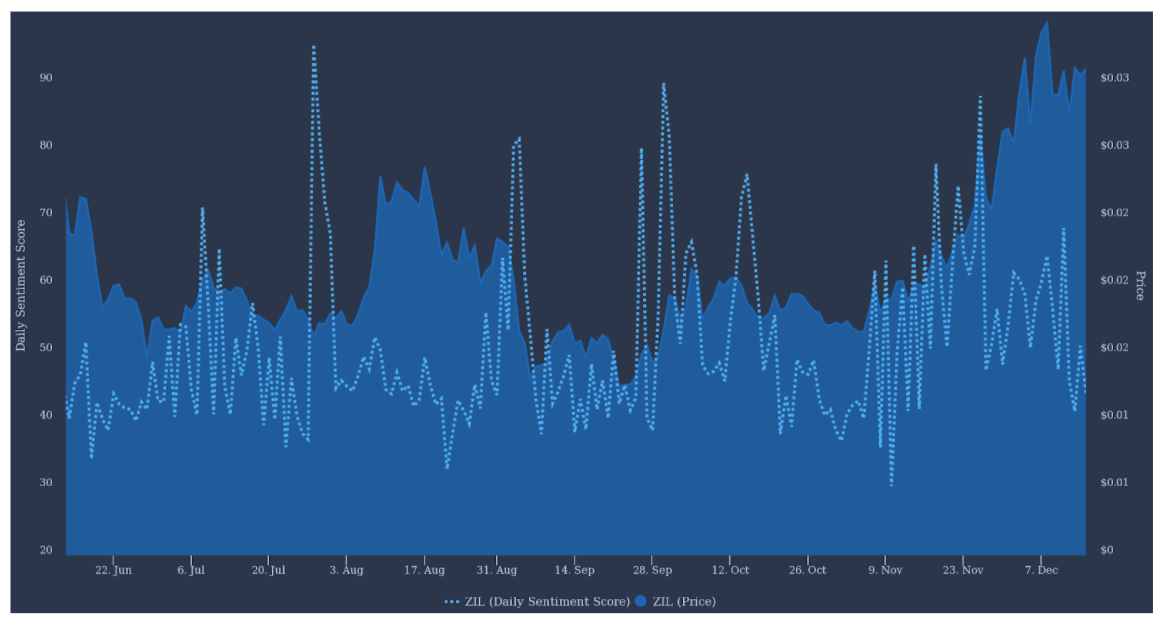 Data acquired from The Tie also shows that price spikes have been accompanied by decreases and increases in ZIL’s daily sentiment score. Historically, these ups and downs have been moments of ZIL price stagnation.

Fortunately, in the case that there is considerable substance behind the upcoming v7.0 mainnet launch, the token price may continue with its recent surge. But, the Ziliqa investors have been hooked to the monthly updates and partnerships. Therefore, it is only natural for the price to remain stagnated in the absence of groundbreaking announcements in the past 30 days.

Up to today, there is no significant traction in Ziliqa’s dApps ecosystem that may be limiting its price upside. The fact remains that another network is handling Ziliqa’s DEX may also be a possible concern to the investors since it does not transpire enough confidence from the newcomers.