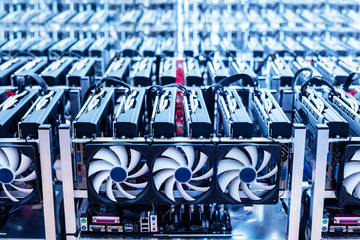 CC Metals & Alloys, or CCMA, stands as a steel plant in Kentucky owned by one Ihor Kolomoisky, an oligarch from Ukraine, alongside Hunnadiy Bogolyubov, his business partner. As it stands now, the steel plant is currently running a crypto mining operation within the plant, which has now been closed off.

The steel plant stands at a ripe old age of 70, and had given out worker lay-offs and closed its core operations back in July of this year. It seems now, however, the company is trying to diversify to try and gain some revenue, doing so now by Bitcoin mining.

According to a worker of the said steel plant, an entire warehouse of the plant had been retrofitted into a data center in order to install computers. Another worker stated that the plant was shipping in these computers by the truckloads to set up in this new data center. It’s estimated that hundreds, maybe even thousands, of these computers are in this warehouse, chugging along in crypto mining 24 hours a day.

The move from CCMA to crypto mining had been seen back in July, as the plant had a third-party be dragged in to install the data centers. Through doing so, the business managed to diversify its profits by jumping into blockchain and artificial intelligence technology.

As for the pros of this operation, a company spokesperson was quick to point them out. They explained that blockchain and artificial intelligence stand as industries needing high-energy, but are expected to grow to $20 billion in total worth. The spokesperson highlighted the pilot program’s success, stating that CCMA will expand this business angle even further. According to the spokesperson, it’s important for the firm to have multiple income sources.

Same Of The Usual Trends

Another thing that the report highlighted, was the rampant influx of companies either dedicated to or expanding into crypto mining that are pushing into Tennessee Valley within the US. This is mainly attributed to the massive abundance of cheap electricity, which is one of the major operating costs in crypto mining. As it stands now, CCMA is one of about five major players within that region’s crypto mining operations.

Of course, no oligarch is without a skeleton in the closet, either already found or yet to be. Both Bogolyubov and Kolomoisky have been hit by the US in a civil lawsuit. The allegations pertain to a falsified loan in Ukraine and the subsequent billions of USD funneled into the US at large. As one would imagine, neither Kolomoisky nor Bogolyubov are keen on it, and are denying any and all of these allegations.