There are three main reasons why bitcoin will most likely see a similar trend in the months ahead. First, the post-halving cycle is coming into effect. Secondly, the relative strength index (RSI) shows some room for a bigger rally. Third, this rally is not overheated, at least in the derivatives market.

The creator of the Stock to Flow (S2F) indicator, PlanB, shared a long-term RSI chart of Bitcoin. This indicator measures whether an asset is oversold or overbought. It shows BTC is still at a neutral level. 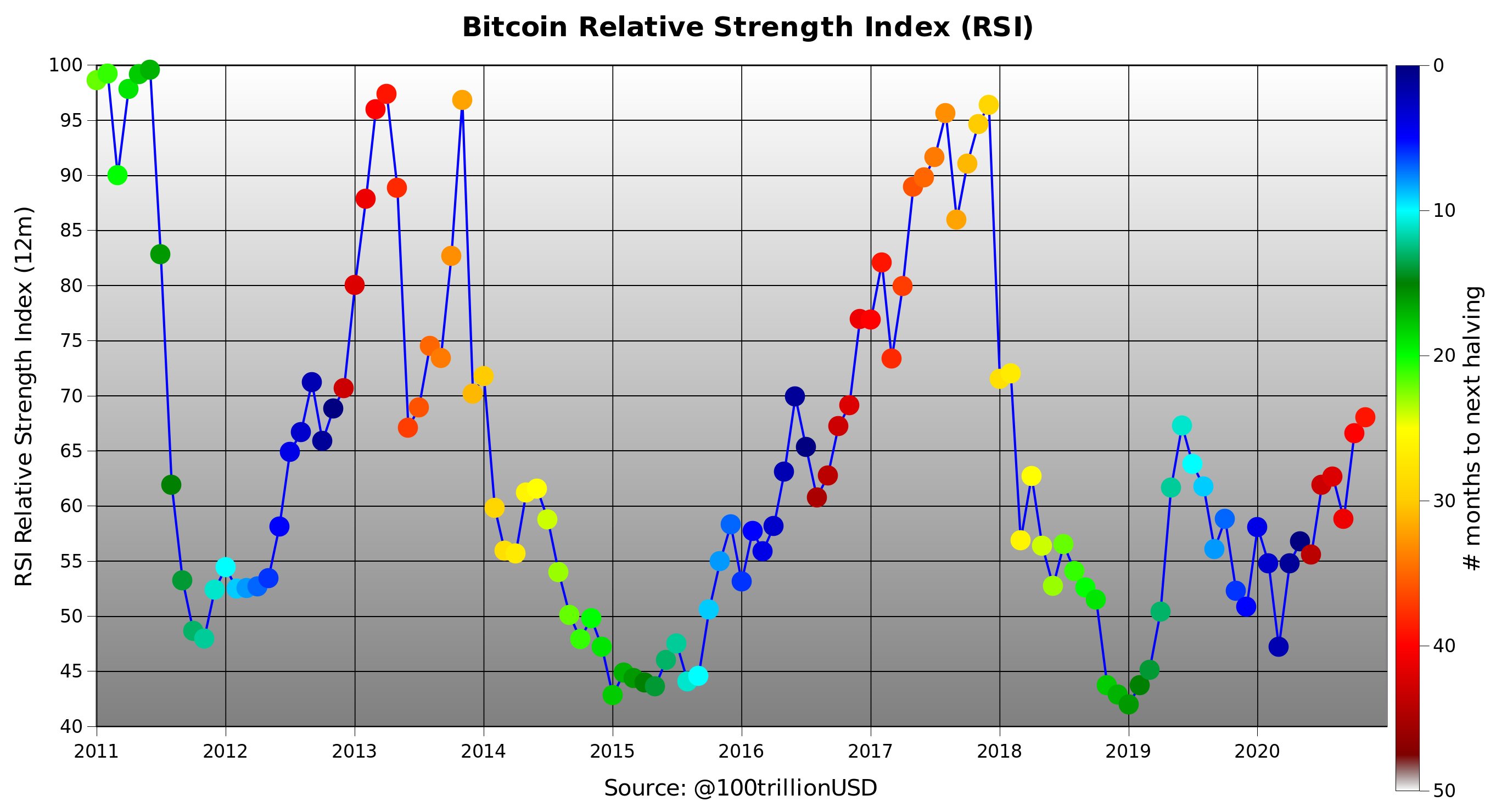 Even though Bitcoin managed to rally from $10,500 to $14,600 within one month, the RSI suggests that there is room for more upside movement.

For example, in December 2017, the RSI of bitcoin surpassed 95 points. Whenever the RSI surpasses 75 points, traders begin to consider the asset to be overbought. At the moment, the long-term RSI of bitcoin indicates that it is still below 70 points.

Back in 2017, one of the key narratives around the rapid surge in the price of bitcoin was its halving event that happened in 2016. A block reward halving that happens almost every four years ensures that inflation is kept in check by reducing by half the rate at which bitcoin is produced by miners.

The slower production of BTC results in an overall plunge in bitcoin inflows into exchanges, leading the supply to drop significantly. The latest halving happened in May 2021, and in 2017, Bitcoin began to rally months after the activation of the halving. Currently, this bitcoin rally goes in line with its past macro rallies.

It is Not Overheated, Sellers In The Spot Market Are Few

Throughout the last five days, the funding rate of bitcoin has remained negative on major exchanges, especially on Binance Futures. It shows that most of the futures market has been shorting BTC.

A rally is considered as overheated when the futures funding rate starts to increase above the average rate, which is 0.01%. In recent weeks, the funding rate of bitcoin has been hovering between -0.01% to 0.01%, indicating a rather neutral derivatives market.

Adding to the uncrowded futures market, there are also fewer sellers existing in the current spot market. There are some sell orders at around $15,000 according to TensorCharts. However, no major sellers at that level and above it.

Since there is little resistance existing between $15,000 and $20,000, it raises the possibility of hitting a new all-time high in the coming months. In the case that the same post-halving cycle as 2017 follows, then BTC would theoretically surge to its peak in Q2 2021. If that scenario plays out, there is a high likelihood that bitcoin may far exceed $20,000.

The current rally depicts a strong momentum for Bitcoin since miners have begun to sell BTC. It indicates that the market is absorbing the selling pressure from the miners. For now, analysts and commentators believe that bitcoin might explode above $20,000 by January 2021.