Bitcoin Explodes To its Highest Since January 2018, Can It Reach $20K?

Bitcoin is dominating the markets, and it is in a rally mode once more. Whether it is fueled by the anxiety and uncertainty from the US election, the future of COVID-19 or, simply increased investor interest, the flagship crypto has hit its highest level since January 2018. BTC had gained 3.3% trading at $14,463 (R228800.47) as of 8:33 a.m. in London.

However, the crypto has been rallying throughout the European session and morning hours of the American session. Interestingly, it has been benefiting from high-profile investments from entities like Paul Tudor Jones and Square. JPMorgan Chase & Co.’s JPM Coin was allegedly used to transact for the first time.

Proponents believe that bitcoin can act as a diversifier in times of uncertainty. Thus, events like widespread lockdowns across Europe and delays of the United States election results might be fueling the surge.

After pulverizing the June 2019 highs at $13,800, the next significant resistance is located around $20,000 as explained by Rob Sluymer, a Fundstrat Global Advisors technical strategist, in October. 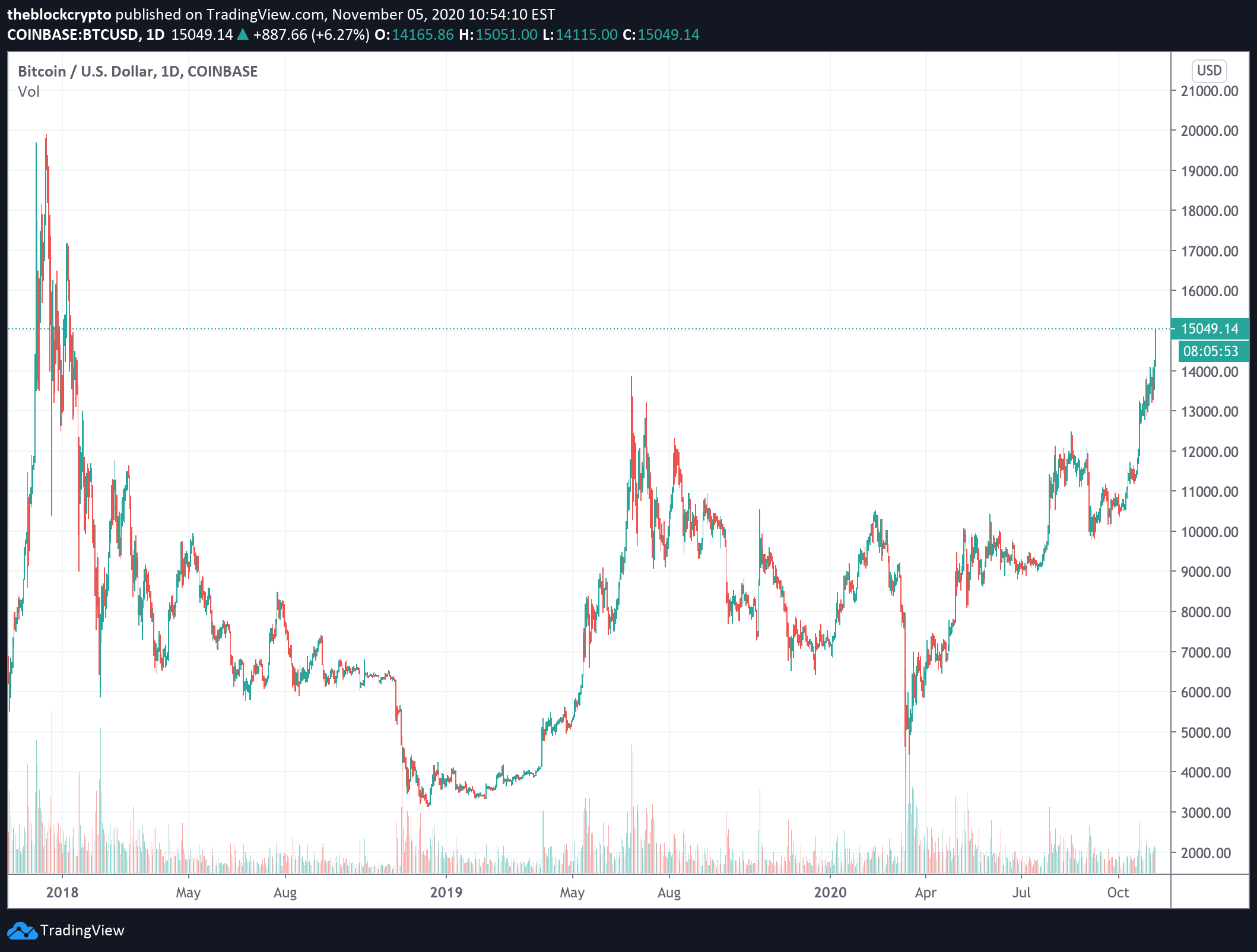 The crypto space is always volatile. Bitcoin has been seen to make parabolic surges before especially in December 2017 and mid-2019, before major plunges. Many investors and strategists are currently doubtful.

Empire Financial Research’s Whitney Tilson sent an email stating that he still believes that cryptos are “a techno-libertarian pump-and-dump scheme” and he urges most investors to avoid them. But, some see the crypto’s march higher as expected to continue. One commodity strategist at Bloomberg Intelligence, Mike McGlone, said:

“Previous Bitcoin resistance at about $10,000 may transition toward $20,000 in 2021. Certain supply leaves demand as the primary price metric, and most indicators remain positive.”

November so far has seen some significant price movements that continue to increase in the activity that started as October drew to its close. Interestingly, open interest in bitcoin options exploded to an all-time high by the end of the month. Furthermore, monthly trade volumes also soared to hit a new peak of $5.8 billion.

October was quite a busy month in the crypto space, especially for the overall network use. New data shows that adjusted on-chain volume for the BTC network has continued to increase since then.

Many famous Bitcoin proponents noted that it was high time for BTC to make a decisive move. Macro investor Dan Tapeiro was seen praising the price models of skilled analyst PlanB.

“Now enterring what is called the ‘moment of realization’ for #Bitcoin,” he tweeted.

“Let’s give some credit to (PlanB) here. I like this model that picked top in late ’17 and most importantly bottom in early ’19. We are now in what I call the hodlers’ sweet spot. Get paid to sit.”

Some commentators think that the crypto can surge to record highs and take its place as a haven asset. How high will bitcoin go? Time will tell it all.