Bitcoin (BTC) has been intertwined with the movement of the global markets which undermines its efforts to turn into a haven asset. However, the flagship crypto’s decoupling from stocks started within days of its NVT price exploding to an all-time high, as explained by Willy Woo.

A projection by crypto statistician Willy Woo indicates that BTC already started decoupling from the US stock market index S&P 500. The first signs of decoupling behavior were seen months ago.

First signs of de-coupling behaviour spotted between BTC and stocks.

NVTP approximates a valuation for BTC with organic investor velocity on the blockchain. pic.twitter.com/AvilB9cfdD

Buying from an influx of new users offers price support which prevents speculators from trading the correlation downwards. NVTP projects a valuation for BTC with organic investor speed on the blockchain

Forecasting this behavior in late September, Woo suggested that Bitcoin will manage to break ties with traditional markets as a result of an influx of new users:

“Bitcoin will decouple from traditional markets soon, but driven by its internal adoption s-curve (think startup style growth) rather than changes in perceptions as a hedging instrument by traditional investors.”

While referring to the Network Value to Transaction Ratio (NVT) indicator that he introduced in 2017, Woo said that Bitcoin’s NVT price has shown some signs of price support despite the S&P dropping steeply in recent days.

The NVT can be likened to BTC’s P/E (price to earnings) ratio. But since the crypto does not have earnings in the literal sense, Woo decided to replace the P/E values with network value. The network value represents bitcoin’s market capitalization and in this projection, it was used together with the daily USD on-chain transaction volume. 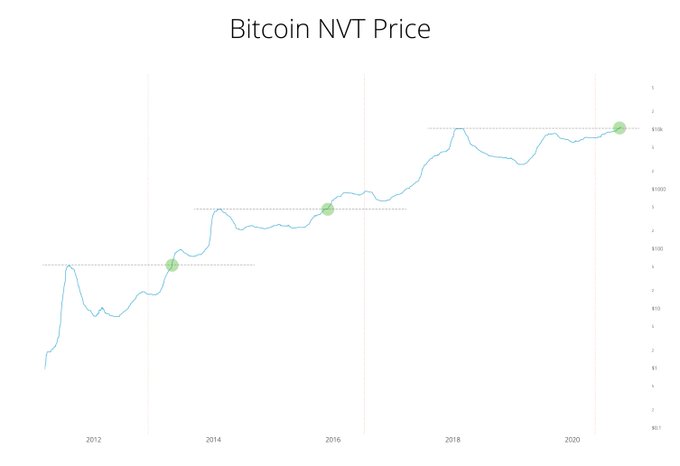 Woo also added that the indicators are leaning towards a suggestion that Bitcoin might start to reclaim its status as a haven asset if the stocks continue to fall:

“What this test shows is that if stocks crash, Bitcoin powered by its large adoption s-curve, swallowing ever more capital, will present perfectly good safe haven properties.”

“Bitcoin is the ultimate safe haven and the market is proving it, Bitcoin could not be more uncorrelated with the stock market.”

Not every person is convinced that Bitcoin had any type of decoupling to do. Analyst Scott Melker Tweeted in May that bitcoin and stocks are not correlated since the inception of the cryptocurrency.

Early last week, Chriss Dunn, a crypto investor, suggested a negative correlation between stocks and BTC had begun. The announcement made Woo reiterate his stance of BTC as a haven alternative to the traditional assets like gold:

“Makes sense that BTC will continue to be correlated in short time frame trading; but not in the longer time frames. BTC is a haven, just that ‘risk-on’ (meaning it’s very new) is skewing this fact.”

Nevertheless, some of the analysts have claimed that an overly excessive preoccupation with the correlation that may exist between the S&P 500 and bitcoin could be quite dangerous. Another analyst, Michaël van de Poppe, said:

“When things get messy, as they did in March this year, “all correlations tend to go towards 1. Since then, gold, silver & Bitcoin have been resilient for any downwards move and showing strength apart from the equity markets. Don’t pin yourself on those correlations.”

If the flagship crypto manages to decouple from the index markets and stocks, it will take its position to become a haven asset and push its price significantly higher.