Bitcoin has been rising in recent weeks. On October 27, 2021, the flagship cryptocurrency recorded new 2021 highs of $13,480. The surge came as fresh news that a bank will soon enter the crypto space underpinned the already bullish markets.

Data acquired from Coin360 and TradingView indicated that BTC/USD was climbing steadily during the day’s trading, gaining over 2% in about an hour. The price action happened after unconfirmed news emerged that Singapore bank DBS had decided to create a crypto exchange and provide crypto custody services.

The news alleges that the crypto exchange will be wholly regulated by the city state’s de facto central bank known as the Monetary Authority of Singapore (MAS).

This move initially came to light through a cached website page which later disappeared from public access. DBS is yet to confirm this rumor. Despite all that, Bitcoin reacted instantly. The crypto spiked out of its range in the lower $13,000 region and reintroduced worries that a correction is unavoidable. 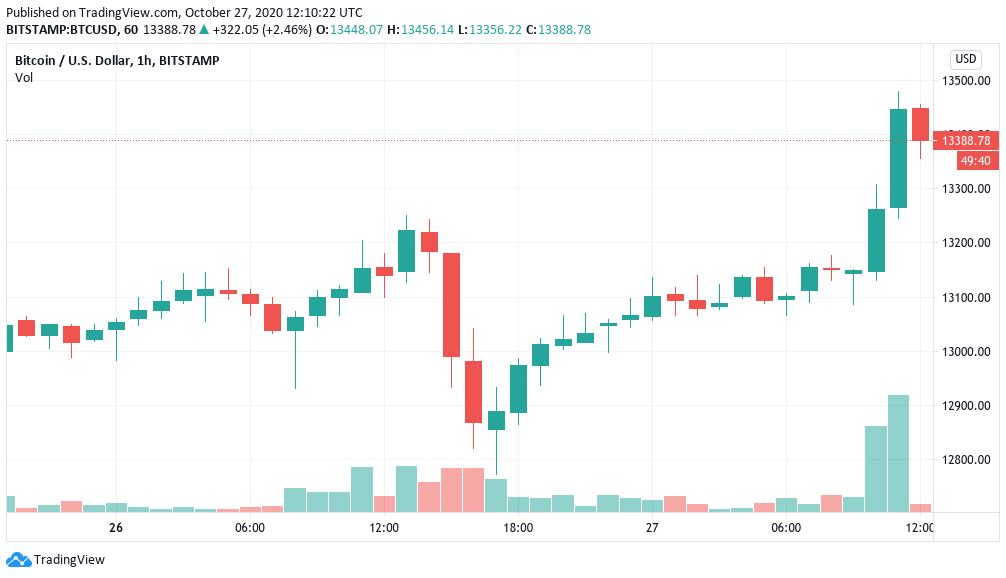 The CEO of Real Vision, Raoul Pal, believes that the bullish atmosphere has been reinforced, and more gains will likely happen now more than ever. He tweeted:

“There are literally only two resistances left on the #bitcoin chart – 14,000 and then the old all-time high at 20,000.  I fully expect new all-time highs by early next year at the latest.”

Such amove will take Bitcoin up by another 50% in almost three months. The biggest crypto by market capitalization has already provided year-to-date gains of over 85%.