NEO Price Analysis: NEO/USD May be Setting Stage for Reversal

The Bulls' momentum may become weak at $25.8 Level 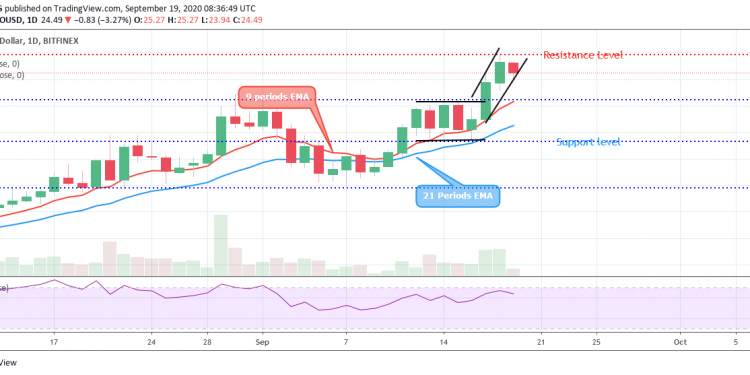 Today, the market opens with the formation of a bearish candle, meaning, the price may decline soon. The 9 periods EMA is above the 21 periods EMA with the coin trading above the two EMAs indicate a bullish trend. However, the Relative Strength Index period 14 is bending down at 60 levels which indicates a sell signal which may be a pullback. After the pullback, the price may break up the resistance level at $25.8 and extends to $29.8 and $33.9 levels. In case the bears break down the support level of $22.4, the support level at $19.3 and $15.8 may be tested. It will be wise to place Buy Stop order at $25.95, Stop Loss at $24.40, Take Profit at $29.29.

Placing the NEO against BTC is bullish. After several days of consolidation, NEO increases in response to an increase in the bulls’ momentum. The former resistance levels at 1588 SAT, 1855 SAT, and 2079 SAT was penetrate and the price reaches 2299 SAT price level. Currently, the price is pulling back.

The price is trading above the 9 periods EMA and 21 periods EMA at a distance which indicates an increase in the bulls’ momentum. However, the RSI (14) on the daily chart is below the 60-level bending down which reveals that the bears may take over the market soon. The breaking up of the resistance level at 2299 SAT may place the price at $29.8 and $15.8.

GBPUSD Is Gearing a Pullback After Breaching Key Resistance Level