Gold, Future Gap, And Stimulus: What To Expect From Bitcoin This Week 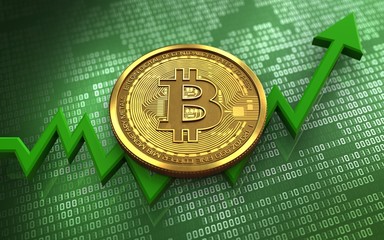 Gold is building on all-time highs as markets await news from the Federal Reserve and Bitcoin price volatility. What will happen next?

Bitcoin (BTC) starts the new week above $10,000 and it is teasing investors with more gains. Will the uptrend last or is a correction coming up on the horizon? Analysts take a look at the coming week and what it might have in store for the BTC price. Several factors may take BTC to the moon or down below the psychological $10,000 level.

While the stocks futures are moving higher on July 27, the primary focus for macro was leaning heavily on geopolitical tensions. China and the US continued to boil the hostile mood as the COVID-19 woes persistently remained in the headlines.

These issues have mainly had a major effect on the demand for haven assets, especially gold. According to reports from last week, gold and silver recorded major appreciation in price while the weekend saw the bullion market hit record intraday highs.

Coming in line with the past sentiment gauges, a lot of faith now lies in BTC after gold’s lead. One analyst, while speaking to Bloomberg, said that gold’s rally was far from over. Senior resource analyst at Australia’s MineLife Pty, Gavin Wendt, stated:

“Strong gains are inevitable as we enter a period much like the post-GFC environment, where gold prices soared to record levels as a result of copious amounts of Fed money being pumped into the financial system.”

Simultaneously, Citigroup placed the odds of gold surpassing $2,000 by the end of 2021 at 30%. Gold bug Peter Schiff summarized:

“The U.S. dollar just hit an all-time record low. You now need over $1,920 to buy a single ounce of #gold. But this record won’t last long as the dollar’s decline is only just getting started. It’s about to plunge to new depths taking the American standard of living down with it.” 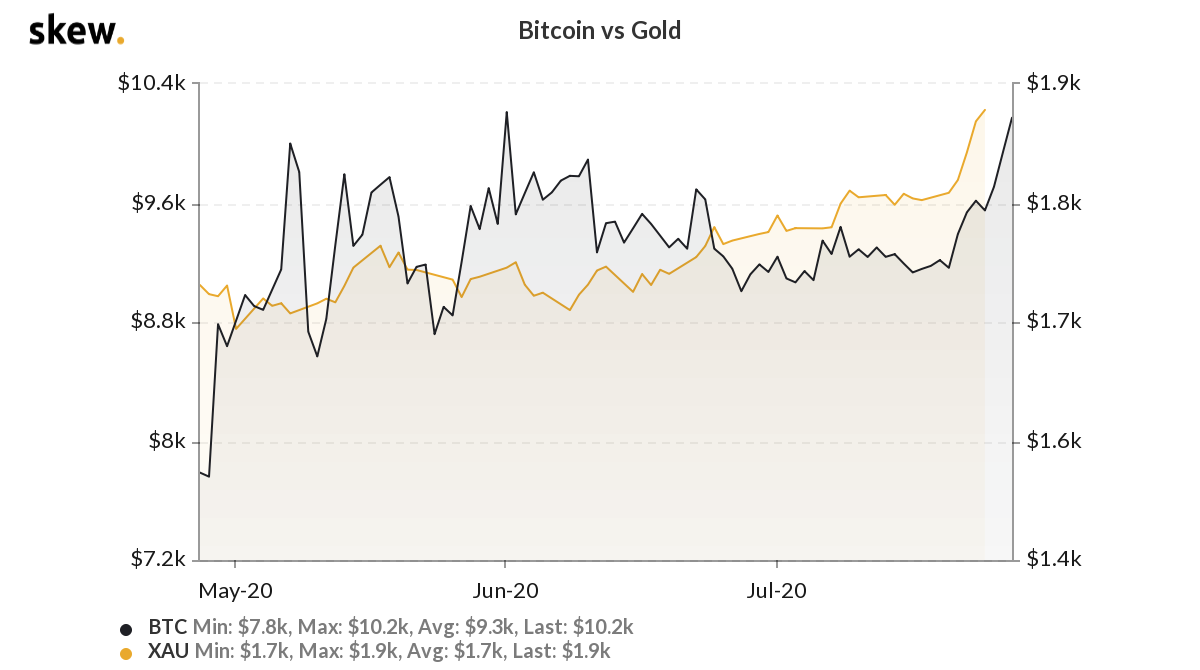 Bitcoin’s surge to $10,300 hardly comes as a surprise against a backdrop of a flight to the haven assets. Several weeks of price compression were highly expected to resolve in a breakdown or up but the analysts were split over which direction the crypto market would take.

The speed with which the weekend breakout happened was quite alarming for some investors. Particularly, the trader behavior indicates that the mood is turning into a short-term profit-taking affair. The founder of on-chain analytics resource CryptoQuant, Ki Young Ju, said:

“BTC price went up too fast. Seems like other whales think so too.”

Ki also uploaded a chart that showed exchange inflows for the last three days. The chart revealed a significant spike in the number of coins moving to the crypto exchange wallets. At the beginning of the surge, a lack of selling from the long-term hodlers indicated that this time, $10,000 would not disappear in a sell-off with the two past spikes.

CryptoQuant’s data now indicates that the temptation for many is significantly high. 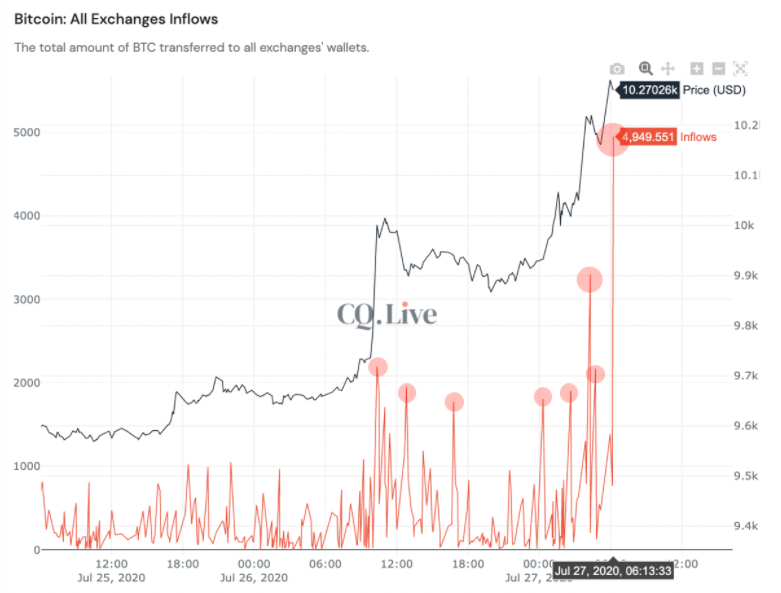 A major force returning to Bitcoin this week affects derivatives markets in the form of a gap in CME Group’s Bitcoin futures market. The difference between Friday’s trading session end and Monday’s start involves several hundred dollars insisting on the contrast to compression. Around $9,650 to $9,900 is the corridor.

Based on past reports, Bitcoin has a normal habit of ‘filling’ gaps left in futures. It is normally within a matter of days or hours after they arise. In that context, attention was turning to a probable plunge to $9,600 from the $10,250 levels to seal the gap. Orders are already piling up below the bottom of this corridor on July 27, around the point of control (POC) at $9,575.

Analysts drew different conclusions about bitcoin and the rest of the market. One analyst said:

“To be honest, I believe Ethereum is starting in a new cycle and Bitcoin is still stuck in its range. The only suspicion I have is that we’re going to have a drop to $9,400 and continue the range for a month.”

Ether surged beyond expectations over the weekend firmly dismantling the resistance at $285 and heading to $330. 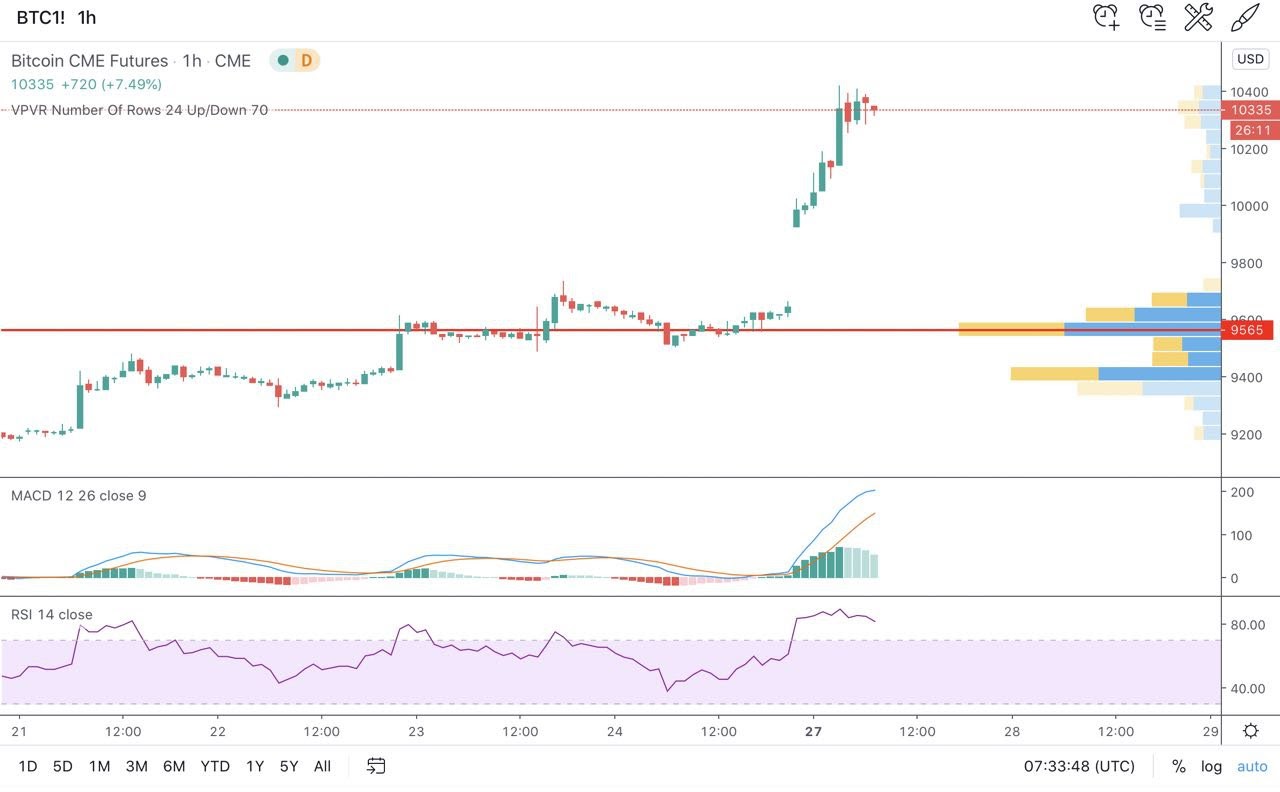 Focus On The Fed And US Stimulus

Returning focus on macro, US stimulus measures were due to be launched on July 27, pumping more dollars into the economy. Simultaneously, markets were looking out for fresh directives from the Federal Reserve, which analysts suggest to keep interest rates at 0.25%. 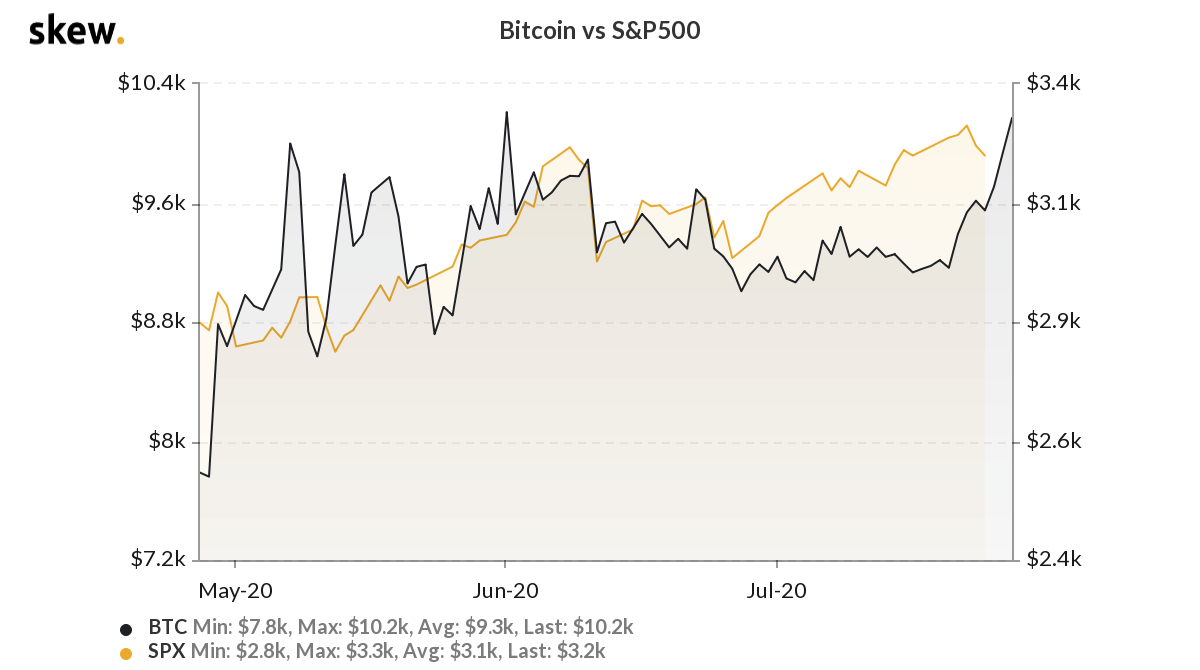 Any form of impact that this decision has on the stocks may somehow contribute to the Bitcoin trajectory. That has happened despite the last weekend forming an exception to the correlation that bitcoin price has shown to the stocks. Schiff continued:

“The reason COVID19 is fatal to the U.S. economy is that we borrowed so much money to artificially boost GDP and the stock market in the past. So, we’re too broke to borrow more to fight Covid now and all we can do is print. The dollar will crash taking the economy down with it.”

Schiff was less than optimistic as ever about Bitcoin’s prospects and he privileged gold as the primary haven as the dollar falls.

As opposed to the spot traders, the bitcoin miners appeared calm in the entire volatility recently. Based on data from CryptoQuant, mining pool outflows did not spike due to price gains. Past events resulted in much more turbulence especially May’s block halving event that cut miner rewards by 50% overnight.

Concurrently, network fundamentals remain intact, with hash rate and difficulty oscillating near all-time highs. An automatic difficulty adjustment on July 28 will bring the metric lower by almost 2.7% based on the current estimates with the hash rate stable.

The difficulty is described as an imperfect yet useful gauge of miner sentiment. On the other hand, the hash rate creates a rough indication of the amount of power needed to secure the Bitcoin blockchain.