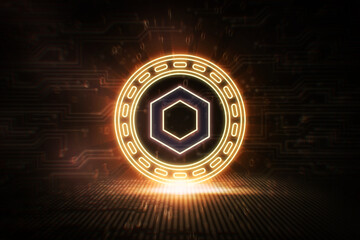 The latest reports published on July 14 confirm that Chainlink has integrated with a social network that is led by a distributed computing pioneer. The alternative social networking platform, Revolution Populi, aims to provide users with control over their data which led them to integrate with Chainlink data oracles.

Revolution Populi is led by David Gelernter who is a futurist and a distributed computing pioneer. This social network is striving relentlessly aiming to displace Facebook by developing a platform where the users can freely post share information about their lives. Through that sharing, the advertisers pay them, and not like it is the case with Facebook.

This network is just the first of many distributed applications that the company now plans to release soon.

This idea in itself does not in any way sound novel since there have been several projects in the cryptocurrency and blockchain spaces that have tried to return data ownership rights to the users. Nevertheless, maybe the most interesting aspect of this project is that Gelernter serves mainly as a chief visionary officer.

He first made a name for himself in the 1980s via his contributions to the field of parallel computing. Later on, in 1991, he published his book titled: Mirror Worlds. The book forecasted the development of the World Wide Web which includes the social networking phenomenon.

That acclaim somehow attracted a lot of unwanted attention from Ted Kaczynski, aka the Unabomber. Gelernter was severely injured on June 24, 1993, when he opened a package that was filled with explosives.

Rob Rosenthal, the company’s CEO told reporters that the social network is one of the three legs of the stool that they are building:

“It’s obnoxious enough that they take our sovereign property, sell it, and keep all the money. But there are much bigger problems out there as a result. I mean, it is the public square. They do control everything in this public square. As you’ve mentioned, the data resides in their private database. […] We have a solution that we’re calling a three-legged stool approach. It is not just a social net, by the way. It’s an ecosystem.”

The other two legs of the stool are the decentralized database that will operate as a decentralized autonomous organization (DAO) and the exchange or market for the data.

The firm will supposedly launch its local blockchain in the coming weeks. The blockchain will serve as the backbone for the ‘stool’. Rosenthal also insisted that Gelernter is majorly participating in the daily activities and running of the company. He was the designer of the user interface for the social networking app.

A New Universe For Chainlink

Rosenthal thinks that this Chainlink integration does not just offer an essential layer to his project; but it can also assist the oracle provider to widen its horizons:

“I think they’ve gotten unfairly typecast and the DiFi world. I think their technology can be spread to other projects such as ours that are more broad-based and more ecosystem-based. I’ve spoken to the guys, I believe that they’re pretty excited about this integration, because it brings them into kind of another realm.”

Revolution Populi aims to conduct an initial coin offering (ICO) in Q4 2021 which will enable it to break away from the recent trend. Rosenthal avoided divulging many details but he said that the platform will be fully compliant.

Several weeks ago, Chainlink’s LINK token has been continuously setting new highs on the strength acquired from several integrations and partnerships.