The Biggest Oil Importer Globally Is Running Low On Storage 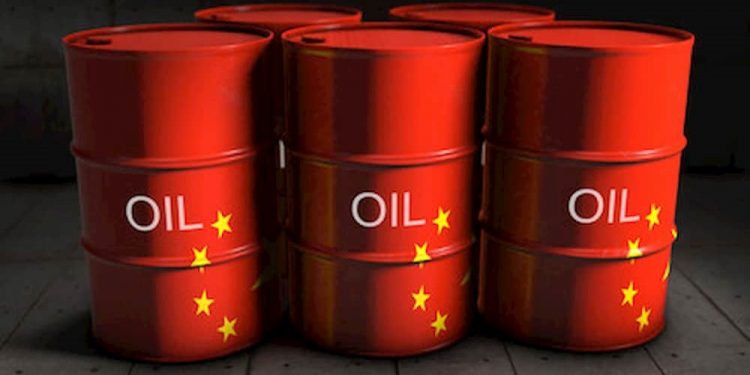 Global oil storage was at a premium when the bottom fell out of international crude oil markets earlier in 2021. In the US, getting enough crude oil storage became a major challenge that even made the West Texas Intermediate crude benchmark to plunge below zero on April 20.

The benchmark ended the day at -$37.63 per barrel, meaning that you would be paid $40 to take an oil barrel from someone else. Nonetheless, China soon busied itself with stocking up on cheap oil to an extent that the country played a critical role in the world oil market’s recovery. Beijing helped in the purchase of a considerable amount of the world’s severe oil glut.

But, China was not alone in taking advantage of the historically low oil prices or purchasing oil trying to salvage their struggling energy industry. In March 2021, the US government announced that it would support domestic oil producers by purchasing 30 million barrels of oil for the nation’s Strategic Petroleum Reserve.

On the other hand, analysts are convinced that China’s stockpiling dwarfs all the efforts that other nations have taken to benefit from cheap prices. The director of commodity strategy at ClipperData, Matt Smith, told reporters:

“China is the only country that has been buying like crazy. They went out and bought the dip.”

Notably, China went all out and snapped up cheap crude at a breakneck place which has now made the country have critical oil storage challenges. The country’s jam-packed waterways are filling up with crude tankers. On July 1, reports emerged that:

“China bought so much foreign oil at dirt-cheap prices this spring that a massive traffic jam of tankers has formed at sea waiting to offload crude as the country’s purchases begin to arrive. China’s so-called floating storage — defined as barrels of oil on vessels waiting for seven days or longer — has nearly quadrupled since the end of May, according to ClipperData. Not only is that the most on record going back to early 2015, but it’s also up seven-fold from the monthly average during the first quarter of 2021.”

Most of the oil that is currently arriving in China was purchased in April and May when the extensively low prices caused a shopping spree. According to the report:

“The hoarding of oil at sea is a reflection of China’s bargain-hunting during a time of extreme stress in the energy market.”

Nevertheless, the oil tanker issue crowding China’s docks and seas is not because the mainland storage is at capacity already. However, it is simply because they cannot get the oil there fast enough. 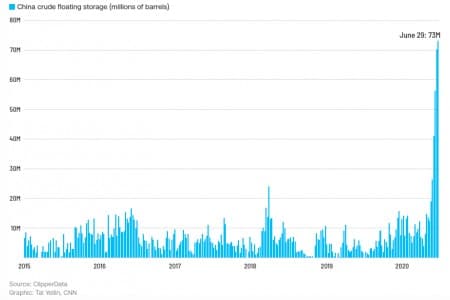 Smith from ClipperData said that onshore storage may still take on a lot more crude oil. Also, the current issue is:

“simply related to terminal congestion. They’ve got so much coming in that they can’t bring it onshore quickly enough.”

The Other Side Of The Story

The first week of July, however, saw at least one Chinese news outlet telling another story. Although China’s onshore storage may not be full, the outlet said that it is getting dangerously close. Another media outlet Caixin reported:

“China is almost out of space to hold the oil that domestic traders bought at bargain-basement prices earlier this year when the Covid-19 pandemic crushed global crude demand.”

Interestingly, Caixin’s reporting is based mainly on the numbers given by Oilchem China. Hence, as of July 8, Chinese crude oil storage was at 69% capacity. It has 33.4 million tons it had stockpiled which represents a 24% increase from 2019.  That is dangerously close to overflowing as Caixin reports:

“That’s only 1 percentage point away from the 70% threshold that experts view as the country’s capacity limit.”

That stockpile might continue to grow and even surpass May’s massive intake. Caixin added:

“The situation, which has also been exacerbated by low turnover, is most prominent in East China’s Shandong province, one of the country’s oil refining hubs. Oil tankers have to wait 15 to 20 days there before they can offload their cargos.”

The total amount of oil that is held in storage may surge to a peak later this month as China’s demand for fuel continues to recover slowly but continually. But if that does not happen, it will result in big trouble for China’s storage industry.