Public Vs Private Blockchain: Salesforce Executive Has A Say 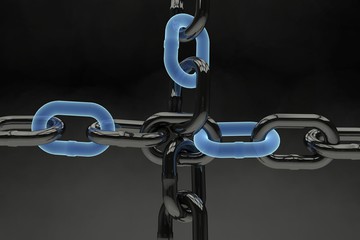 Public blockchains have come under the attack of Salesforce executive. However, EY and VeChain came in to explain how different businesses are using them. The issue of whether enterprises should install public or private blockchains for business has nowadays become quite relevant. A recent study from Fortune Business Insights forecasted that the blockchain market will surpass $21 billion by 2025.

The study also highlighted that many large companies are increasing momentum to the market using new investments. Interestingly, as some of these players join the blockchain space, information about the perfect blockchain solutions for enterprises is coming up for some debate.

For example, during the online Consensus: Distributed Conference, the senior vice president of emerging technology at Salesforce, Adam Caplan, said that public blockchains are not adequately secure for enterprises to leverage.

What Does This Market Need?

When asked to explain, Caplan told reporters that while Salesforce customers would prefer all the advantages and benefits that a public blockchain can offer, such as full transparency and audit trails, enterprise clients still need data to be shared selectively:

“Our customers are saying they want to share data with our partners and collaborate more strongly — all the benefits of classic blockchains, but they also don’t want to share information with everyone. They may want to share certain data with companies inside their network, but not outside the network. They also require granular security tools.”

Commenting on their use case, Caplan said that the Salesforce blockchain caters majors to business-to-business customers who need various permissions and security settings throughout a blockchain network. He added that for these organizations, everything goes down to understanding who is allowed to access data and governance.

In that context, Caplan said that public blockchains for enterprise use are beginning to ‘fade away.’ They are fading because the hype around enterprise blockchain technology is becoming a reality, explaining:

“We are now moving past the hype of enterprise blockchain from a few years ago and are focusing more on the business value and ROI blockchain can bring to companies. As we move in this direction, elements such as running your infrastructure, decentralization, and the meaning of consensus start to fade away, along with the theory of public blockchains for enterprises.”

Although that might be the case for Salesforce, Caplan did acknowledge that the public blockchains do offer security for various use cases. He said that bitcoin is secure while being overly public. Moreover, he said that financial use cases featuring any digital currencies and assets are perfect models for public blockchains.

Why Should Enterprises Install and Utilize Public Blockchains?

The most crucial question is whether public blockchains can effectively get leveraged to fit various enterprise use cases, even those operating away from the financial realm. This is critical to consider, particularly when determining why enterprises would utilize blockchain networks initially.

The results from an EY report conducted by Forrester Research reveal that many companies consider blockchain technology as a solution that can enhance business performance while preserving data integrity. That, in turn, may lead to new revenue or business models.

Other notable blockchain use cases include enhanced efficiencies for supply chain management, digitization of document flows, and payment support processes. Nonetheless, the report says that pressure to join any private network launched by another company is not a major driver for the adoption of blockchain technology.

Although private blockchains are a popular option among enterprises, this report highlights the significant growing interest in the public blockchain networks for each of the mentioned use cases.

“First, blockchains can execute transactions reliably and properly without intermediaries. Secondly, they act as an immutable form of record keeping. Both of these features are things that private blockchain networks are not capable of.”

Brody said that private blockchain networks need intermediaries based on their descriptions. Additionally, he stated that these systems might never be considered as immutable record storage since there are no adequate nodes on independent systems, stating:

“Whereas the Ethereum blockchain has 10 thousand nodes, it’s not uncommon for private blockchains to have a few nodes and execute within a single cloud provider infrastructure.”

There is a lot of potentials for the public blockchains to flourish in the enterprise world. But, work needs to be done to ensure scalability, security, regulatory requirements, and much more. Also, EY has been working with ConsenSys and Microsoft to create an open-source blockchain project known as Baseline Protocol. This blockchain runs on the public Ethereum mainnet.

The idea for Baseline Protocol came up almost a year ago when EY was working on another project known as Nightfall according to Brody. The Nightfall project is a solution meant to offer inexpensive, scalable, reliable, and private infrastructure for public transactions.

Brody said that Nightfall eliminated significant objects to make public blockchains viable for private transactions like lowering gas fees. However, some challenges remained. Baseline Protocol tries to solve most of the remaining challenges linked to enterprises. According to Brody:

While progress for the Baseline Protocol is still underway, John Wolpert, ConsenSys’s lead developer, said that Baseline can enhance contact tracing. It is meant to specifically address security flaws noted in a proposal for a contact tracing system recently developed by Apple and Google.

In matters of security, Brody highlighted that Baseline Protocol has come up with solutions to security challenges associated with public blockchains via zero-knowledge proofs. He mentioned that enterprise data never gets stored on-chain. While using Baseline, the only information that is stored on-chain is hashes, links, and mathematical proofs.

He also said that zero-knowledge proofs are crucial to solving scalability issues and challenges on the Ethereum blockchain. He added:

The chief operating officer of VeChain, Kevin Feng, said that public blockchains have come a significantly long way over the last several years. Feng told reporters that after enterprises have an enhanced understanding of the benefits of public blockchains, they will ensure that open networks are better than the private blockchains:

“We have observed the trend that many enterprises are moving to open blockchains. Many of our clients, like Walmart, are using the VeChain blockchain to track information on their products and then digitally certify that data.”

Feng said that VeChain recently joined hands with the H&M fashion brand to offer supply chain tracing data to the customers. He said that over 4,000 sustainable products were efficiently traced using ‘My Story’ which is a traceability platform. The platform is powered by VeChain and developed by the international classification society DNV GL.

Just like the Baseline Protocol, VeChain also leverages zero-knowledge proofs. Feng acknowledged that sensitive information is not kept on-chain. Instead, the hashes and timestamps are stored on the blockchain where every user can see certain information that happened during specific times.

Feng also said that governance is another major issue when it comes to enterprises that use public blockchains but have other governance mechanisms available including “proof-of-authority,” where authority nodes are operated by enterprises or individuals, instead of relying on mining power.

The head of partnerships at Orbs, Danny Brown Wolf,  also told reporters that several enterprises are interested in moving away from private blockchain models to the hybrid approaches. They eventually moved entirely to the open blockchains.

Wolf said that there still is concern growing around ‘trusted third party’ controlling the private blockchain networks. She added:

“Salesforce acts as the trusted third party, meaning companies must trust Salesforce to handle their data.”

Just like VeChain and EY, Orbs is also trying to solve issues surrounding the public blockchains for enterprise use. Wolf said:

“We designed Orbs to overcome the issues of governance by giving every application it’s own virtual chain, connected to the main chain. This allows for autonomy when it comes to governance, which can be done at a virtual chain level rather than at an infrastructure level. In turn, power is easily maintained by organizations, while still providing strong guarantees of a public blockchain to users and partners.”

“Already, we see some companies that have decided to use public blockchains in limited ways — whether it’s taking payment in cryptocurrencies, non-fungible tokens like baseball trading cards, and even some stablecoin-like usage, such as the Tradeshift/Monerium e-money partnership. We also think there is a lot of potential in public, permissioned ledgers, like the Sovrin Foundation’s identity utility network.”

Although that might be the case, Behlendorf said that most of the industries interested in leveraging blockchain technology still have regulatory standards. These standards revolve around privacy protection, data residency, taxes, and auditing, along with higher performance requirements that any public ledger is capable of currently supporting.

As a result of these reasons, Behlendorf thinks that it will take a while for enterprises to transact primarily on public blockchains. The chief technology officer of IBM Blockchain, Gari Singh, while echoing Behlendorf, expressed the same concerns saying:

“Generally speaking, permissionless blockchains are not suitable for most current enterprise use cases. Enterprises must adhere to many regulatory and compliance requirements and without knowing who the participants (both validators and client) are, it’s not possible to conform to these requirements.”

Nevertheless, while a private blockchain model may now appear more suitable for enterprise needs, Brody remains optimistic. He noted that private blockchains continue to lack a primary element for businesses to successfully function as a working ecosystem, stating:

“Most private blockchains are parties that no one came to. Even those with participants don’t have a robust or competitive service provider network. But Ethereum has an enormous network of service providers. Our goal is to migrate this DeFi network from transactions that are done entirely in the public, into transactions performed privately.”

For now, the debate goes on but no clear decision can be made about what is better than the other for enterprises: private or public blockchains.