Visa was among the Libra Association pioneer members before it abandoned the project due to increased government scrutiny. But, it seems the company was not done with the crypto world. Visa has now applied to develop digital currency on a blockchain network with the United States Patent and Trademark Office.

Their digital currency will potentially be powered using the Ethereum blockchain.

The application was published May 14 but filed many months back in November 2018. Inventors Alexander Pierre and Simon J. Hurry working with the Visa International Service Association in San Francisco, have now sought a patent for a digital currency recorded on a blockchain and entirely controlled by a central entity computer.

The patent cites Ethereum as a possible network. Interestingly, the application details two records. One of them indicates:

The other record notes the “removal of the physical currency from circulation in a fiat currency system.”

The patent also describes a centralized process aiming to maintain the value of the stablecoin:

Although the US dollar is mainly mentioned as one of the fiat currencies to be used in this project, Forbes reported that the patent might apply to several other central bank digital currencies (CBDCs) such as yen, pound, and euros:

“The physical currency of a central bank anywhere in the world could be digitized.”

Coinbase announced in February that it had become a key member of Visa. That would enable the exchange to issue debit cards for spending cryptocurrencies. Just two months later, the Lightning-compatible Fold app joined Visa’s Fintech Fast Track Program. Together, they rolled out a co-branded Bitcoin cashback rewards card. 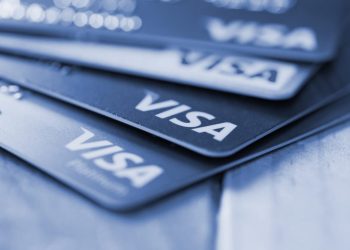