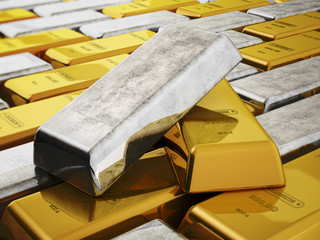 Gold and silver are finishing this week on a high note, riding on the concerns over the economic growth after the second wave of virus infections and simmering trade tensions between China and the United States.

The precious yellow metal went back toward its April peak when the prices surged to the highest since 2012. Also, Silver was not left behind jumping to a two-month high. Prices are having a long-awaited breakout moment with the global market anxiety mounting according to the head of market analysis for EMEA and Asia at INTL FCStone, Rhona O’Connell.

“There are fears over everything from political leadership through the health outlook overall and associated economic-financial and political risk.”

What Is Fueling The Movement?

Investors and traders turned to haven assets after U.S. Federal Reserve Chairman Jerome Powell warned earlier in the week that the COVID-19 pandemic might take a heavy toll on the economy. Fears increased on the gloomy American unemployment data on May 14, and President Donald Trump said that he does not want to talk to President Xi Jinping currently.

Countries that enjoyed success combating this virus, including China and South Korea, now report a rising number of infections again. In the United States, Texas saw its worst day and its largest jump in new cases since the start of the pandemic. That comes two weeks after controversial moves to reopen the state’s economy.

The head of the commodity strategy at Saxo Bank A/S, Ole Hansen, said:

“The market seems to be bracing itself for disastrous hard data for April and May and a wave of bankruptcies. That supports the traditional safe-haven gold, and has added some extra spice to silver.”

Is Bitcoin Taking Over From Gold As The New Haven?