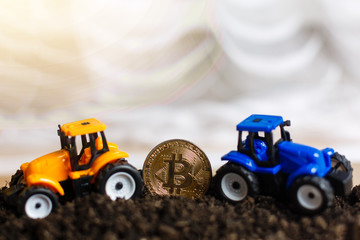 Several months ago, the cryptocurrency community was hit by the news that users of the Decentraland virtual world platform have already spent more than $1 million on digital land. Reports reveal that the biggest deal for the Decentraland project was a sale worth $215,000. This sale involved an unknown user.

Every plot in Decentraland represents a patch of land set up in a 3D virtual world. In this world, the participants can do almost anything that they want. The virtual world is not endless, and every token that is spent within the project is assigned 10 square meters.

Recently, the blockchain projects on the Bitcoin revolution platform that let users own virtual items and property, including land, have been gaining some considerable momentum. Virtual reality started to develop in the past few years, even though the technology behind it has been available for some time. For now, many available projects are using VR in different sectors, including gaming, design, education, and real estate.

This moment appears to be what blockchain and cryptos have been waiting for since they can be used seamlessly to help the growth and development of the sectors mentioned above. Blockchain works with the principle of a self-organizing distributed ledger. On this platform, counterfeiting digital currencies are almost impossible since transaction information is known at all stages to all of the network’s participants.

When investors noted that it is convenient and safe to use cryptos in the real estate industry, transactions started surging. It is now possible for people to buy houses with Bitcoin, take virtual tours of the homes that are still under construction, and arrange a mortgage on a blockchain.

The notion that experts with experience in building digital spaces can also develop virtual worlds has gradually seeped into the blockchain sphere. Thus, many new projects have started coming up, including Decentraland, where the users can own virtual land in the game. Just like in the real world, they can sell or even rent it.

A senior research analyst for the International Data Corporation’s European Insights and Analysis, Radoslav Dragov is convinced that blockchain is a digital asset. He also believes that tokens can be used as an investment in these virtual areas where the people in real life cannot attend:

“Using blockchain to create a digital representation of a real tradable asset can provide greater accessibility to assets that cannot be easily exchanged or require a high minimum investment. For example, tokenization of illiquid assets such as real estate allows many people to invest small sums of money in a particular piece of land and then sell the tokens on the secondary market. This process of asset tokenization is democratizing investments.”

A further impulse to the development of the virtual world is supported by large global IT companies that are leading in various technological developments. Mark Zuckerberg spoke at the annual F8 conference in San Jose  about Facebook’s plans:

“Augmented reality and virtual reality are about delivering a sense of presence — the feeling that you’re right there with another person or in another place.”

Specifically, the goal is to create the ability to communicate using an avatar of a real person using a VR headset.

Just like many other IT-fields, where blockchain technology is actively used, projects have appeared in the segment, with some attracting multimillion investments from various gaming firms. One notable project is Square Enix and its $2 million financings of The Sandbox.

Here are some of the promising VR blockchain platforms and explanations of why they need decentralization and what their primary differences are from one another.

This VR platform enables players to create, sell, and buy virtual items. The original idea of this project is to develop a virtual space that users can own. The participants using the platform can own plots of virtual land measuring ten by ten meters, which they can use to create any objects on them. They can set up cities or small shops and do anything that they want to do on their property.

The general idea of this project appeared in 2015 but waited until 2017 for active developments after the project’s ICO (initial coin offering) that raised $20 million. The Decentraland platform uses its local crypto called MANA, an ERC-20 token. MANA is used as the form of payment to buy plots of land and acquire goods and services in Decentraland.

This platform was designed by its creators to be entirely decentralized. They made it that way responding to the community’s request for a free virtual world where users and not the administration control the power over all the content on the platform.

Based on an official announcement, Decentraland was given to the public in February 2021. That launch was followed by the development of a DAO (full decentralization of the world’s infrastructure). It is well designed to guarantee complete decentralization of the platform. Hence, it accelerated the exchange of data among the users and enhanced the way content is exchanged on the platform.

Last year, one of the biggest computer game developers, Sandbox Games, set up a decentralized blockchain gaming platform. In this platform, users can buy land in virtual space for real money and use it as they please just like it is the case in Decentraland.

The first sale in this virtual Lands happened at the end of 2019. By February 2021, the developers sold the land the second time, with approximately $200,000 spent by users. Among these active buyers were both large gaming companies and ordinary gamers. Some of the notable companies include My Crypto Heroes, Cryptokitties, Old Skull Games, and Dapp.com.

The third and last sale happened in mid-March, and it comprised 10% of the available supply for sale in the project’s metaverse. LAND token sales are made using Ether or DAI. Interestingly, the cost of one LAND token that corresponds to a specific area of the virtual world that is located in the Sandbox metaverse is $48.

In general, the developers plan to conduct up to five rounds of LAND token sales with the launch of the gaming platform scheduled to take place later in 2021. The co-founder and chief operations officer of The Sandbox, Sebastien Borget, explained how the players could use their virtual squares of land:

“In The Sandbox, LANDS are the epicenter of our user-generated content platform. A LAND is a digital piece of real estate in The Sandbox metaverse that players can buy to build experiences on top of. Once you own a LAND, you will be able to populate it with games and assets. Each LAND is a unique (nonfungible) token lying on the public Ethereum blockchain (ERC-721). A total of 166,464 LANDS will ever be available, contained in a map that will form The Sandbox metaverse.”

This open, sandbox-like environment, where there are no specific goals, ensures that the users are free to do and create whatever that they desire. It is somewhat a stripped-down version of Decentraland, which is also a virtual land platform based on Ethereum blockchain, It works through nonfungible tokens. The app gets its inspiration from Minecraft with its minimalistic interface and simpler visual effects.

All the virtual land available in CryptoVoxels is not quite diversified. The world is growing rapidly, and it will not be more than 36 by 18 kilometers. Nevertheless, the project differs from the rest, just a little. Notably, the cheapest piece of ground costs about two times less than how much it costs in Decentraland. It costs almost $240.

CryptoVoxels has been improving in sales. Users made 130 deals between March 12 and 16, according to an official report. Those deals amounted to $66,800 in trading volume. Comparably, in the same period, Decentraland users completed just 53 deals. That corresponds to a weekly trading volume of $22,300.

This cross-platform is a social VR world that launched in 2018. It lets anyone acquire land and build or import objects to create a common virtual universe. This project enables its players to use VR headsets like Oculus Rift and HTC Vive.

Somnium Space officially announced in February 2021 the launch of its version 2.0. Also, they added new features to enhance the user experience. In-built integration with NFTs has been included in this virtual world, enabling users to place any NFT directly on their Somnium land plots and explore them.

Developers will also launch their in-game currency known as Somnium Cubes (CUBE). This currency is intended to facilitate microtransactions in Somnium Space. It is used to pay for teleportation to the other side of the world or renting an item. Landowners can buy user-created content using CUBES.

Shifting from reality to blockchain

Currently, there is a steady trend toward the development of virtual reality and property amid the growing digital economy. This industry has real economic value. The next step for VR might be to pursue a sustainable, equal, and transparent digital world. Borget then said:

“There should no longer be virtual frontiers, even in the digital space. If we compare the currency flow in and flow out of metaverses just like real-world countries, then we should embrace the idea of the free circulation of goods (creations and games) and people (players) between these virtual worlds. Giving control back to players by enabling them to reutilize their game elements across several games can reinforce the value of these game elements, as well as be used as a user acquisition strategy by other game developers.”

Nonetheless, Dragov believes that blockchain technology just like in the digital currency space that is fully protected by code coupled with a distributed network, can enhance the development of the digital economy:

“Asset tokenization holds great potential to disrupt the financial industry, and it will gain more traction in the next five years. Making concrete predictions is difficult because regulation, which is the main impediment to widespread tokenization, is often undefined, likely to change, and varies from jurisdiction to jurisdiction. Nonetheless, asset tokenization is one of the innovative applications of blockchain that has real staying power.”