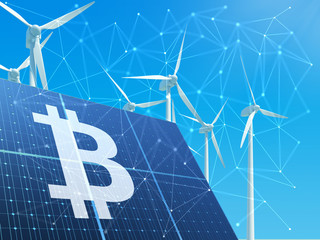 Sonnen Group is a Royal Dutch subsidiary. The Group announced a partnership with the Energy Web Foundation (EWF). It will use EWF’s blockchain to develop a virtual power plant (VPP) in Germany.

The VPP will comprise of a distributed network of residential energy storage systems that are intended to absorb a lot of wind power while simultaneously reducing Germany’s renewable energy deficit.

As Germany gets ready to shut down its coal-fired and nuclear energy plants in the coming years, the European nation has experienced a boom in renewable energy production. Many green energy producers have launched while the existing ones have expanded their operations to meet growing demand.

Nevertheless, the seasonal nature of power and production and electricity demand has caused a glut of renewable wastage. In 2018, Germany produced 5.4 terra-watt hours (TWh) of renewable energy in total. In Q1 2019, the country produced 3.2 TWh of wind energy.

Sonnen’s VPP is well designed to support its regional power grid through the absorption of excess wind energy. That energy is stored across a large network of the company’s proprietary “Sonnenbatteries.” The network is integrated using ledger technology to create a new virtual power plant.

All the transactions between Sonnen and the grid are entirely executed via smart contraccts. Additionally,t he transaction fees are processed in the form of the Dai (DAI) stablecoin. By avoiding an overload to the power grid, these blockchain-based VPPs aim to facilitate more expansion of Germany’s renewable energy production.

Micha Roon, Energy Web Foundation CTO, explained that  the use of:

“A blockchain-based approach to reduce curtailment from large-scale wind energy by leveraging the available capacity of distributed batteries is a vision of the future.”

“virtual power plants such as those from Sonnen are the technical building block for this power grid; that has been missing up to now and can help to ensure that less green energy is lost. With a flexibility market for renewable energies and the automatic exchange of supply and demand; we are realizing the next step towards a smart grid that can deal much more flexibly with fluctuations from renewable energy.”

As the German power sector quickly changes, a continually increasing number of clean energy producers are now exploring and considering the use of blockchain-based technologies.

Blockchain technology provider Unibright (UBT) confirmed on March 9 that it had joined hands with Wasserkraft Mittelrhein, a German energy startup. The two entities aim to create a decentralized network of electricity-generating buoys set up using the Unibright Framework.

Wasserkraft’s “power-buoys” measure over 36 feet long and weigh over seven tons. Every buoy produces enough electricity to power 100 households for one year. This project is expected to have an installation of 16 power-buoys in total.