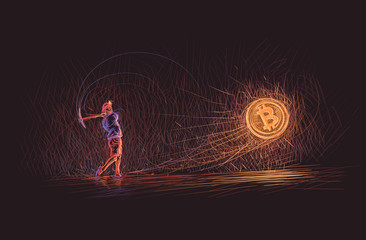 The mining industry keeps suffering whenever the crypto markets plunge. In that context, Bitmain, the crypto mining giant, is reportedly planning to reduce its workforce by an additional 50%. On December 2, Wushuo Blockchain reported that Bitcoin mining rig manufacturer, Bitmain has created a ‘personnel optimization plan.’

According to that plan, the firm will lay off a considerable portion of its employees before the next BTC halving scheduled for May 2020. Bitmain is the biggest producer of crypto mining machines in the world. It is expected to hold an annual meeting on January 17. Reports suggest that the layoffs will have been completed before that meeting.

People who are well-knowledgeable about this matter believe that the reason for these layoffs is the imminent Bitcoin halving. That event will reduce by half the number of new coins awarded to miners. The co-founder of Primitive Ventures, Dovey Wan, playfully dubbed the Bitmain layoffs as the “first halving of 2020.”

Bitmain had already endured a major layoff round in December 2018 which also affected about 50% of its employees. At that time, Bitmain explained that the layoffs were just a part of creating a sustainable business. The company added that it would continue to double down on hiring the best talent from a wide range of backgrounds.

Bitmain has been contacted about these latest developments but it is yet to respond.

The Shenzhen Bao’An District Court recently ordered the freezing of 4,718,710.68 yuan ($676,000) of Bitmain’s fully-owned subsidiary, Shenzhen Century Cloud Core. That ruling came after Dongguan Yongjiang Electronics, a manufacturer of electronic components, requested the court to freeze that amount to guarantee that it could claim it in a continuing trade contract dispute.

The matter is still in court and might be decided later this year.

Tech billionaire and Bitmain co-founder, Wu Jihan, recently reappeared at the helm of the company. He did so after ousting Micree Zhan, a fellow co-founder, from the mining company in October 2019. Zhan alleged that he was disbanded as a legal representative of the company without his consent.

All that happened after Wu Jihan broadcasted an email claiming that Zhan had left the company. Wu abruptly left his post as CEO of Bitmain almost a year before moving into a non-executive role on the company’s board. how will this matter get resolved? Time will tell it all