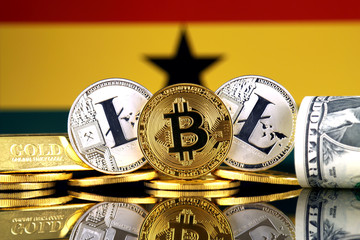 Since its inception, Bitcoin has penetrated almost all parts of the world including Africa. Although Africa is yet to embrace the nascent industry, various proponents like Jack Dorsey believe that the future of Bitcoin is in Africa.

One of the countries that seem to be embracing crypto technology in Ghana. The West African state, for now, maintains a cautious approach to digital currencies in spite of its central bank’s aim to develop a virtual currency in 2021. In the last five years, Ghana has become the fastest-growing mobile money market on the entire continent.

The increasing number of mobile money users is a major proof that the digitized payment systems are offering a reliable means for people to become financially active. According to a 2019 World Bank economic analysis, the total number of registered mobile money accounts in Ghana surged from 3.8 million to 23.9 million between 2012 and the end of 2017.

These statistics show the power of mobile networks in offering a solution for the previously unbanked or financially-excluded people to transact money from anywhere at any time. Mobile phones are enabling many people to become financially active without needing to use cash or card services.

The shift to mobile payments has not escaped the eye of the country’s central bank. The Bank of Ghana revealed its plans at the end of November 2019 to explore the development and implementation of a central bank digital currency in the new year.

Dr. Ernest Addison, the Bank of Ghana governor, announced that the bank has been working relentlessly on a pilot project with several stakeholders to determine the issuance and use of digital currency. The announcement was made at the end of last month at Ghana’s National Banking Conference.

This move is an effort by the nation’s authorities to stay ahead of the increasing volume of mobile money users and drive the digitization of the Ghanian financial industry.

Ghana Does Not Regulate Crypto

The rising popularity and increase in mobile money services users in Ghana do not directly mean that blockchain technology and cryptos are enjoying the same level of success in Ghana. Cryptos are currently unregulated in the country with no definite laws governing their use as confirmed by the Ghana Securities and Exchange Commission.

Even though this sector is unregulated, the Ghana SEC issued a public warning to all investors in March 2019. Investors are advised to do their due diligence when transacting with unlicensed or unregistered trading platforms touting “high returns on investment.” In that warning letter, 24 cryptos were listed including ETH, BTC, XRP, and LTC.

Ghanian authorities stated that cryptos are not recognized as legal tenders in the country. Frank Donkor, the SEC’s policy research department manager, confirmed that an in-depth market study is yet to be done. He was replying when asked for a general gauge of the level of interest in cryptos in Ghana:

“We have not conducted a market survey to determine the interest in cryptocurrencies, however, as indicated in the public notice, people are attracted to it because of the promises of high returns on their investments.”

Donkor also denied the reports that came up earlier in the year from the local media outlets that suggested the local SEC would consider authorizing the use of cryptos. That will continue to remain a hiccup to entry for crypto users in Ghana as the official said:

“No legislations back the trading and use of cryptocurrencies in Ghana. Thus investors who tend to invest in such currencies or assets may be doing so at their own risk and are not protected under the Securities law regime in Ghana.”

No End Yet for Cryptocurrency Apathy

Currently, there appears to be a considerable amount of apathy toward cryptos and blockchain technology in Ghana. That is evident in the general statement and public warnings that were repeatedly issued earlier this year. The Ghana SEC’s belief that a significant attraction for using a digital currency is the promise of huge returns on investment.

All that suggests that the body may be lacking enough knowledge about the technology and efficacy of the systems that underpin cryptos like Ethereum and Bitcoin. The president of the registered non-profit organization Blockchain Society Ghana, Omar Majdoub, thinks that Ghanians and policymakers in the country are misinformed about the fundamentals of crypto and blockchain technology.

According to Omar, there is an increasing interest in the industry in Ghana. However, misinformation has made most people believe that all cryptocurrencies are fraudulent money-making schemes. He also thinks that there is curiosity toward the applications of blockchain technology. However, the real adoption of technology is considerably low.

Innocent investors worldwide have been swindled by different crypto scams. Ghanian’s are not exceptions to falling victim to these scams. Omar suggests that a strategy to shield the people from similar situations has resulted in negative perception toward the industry in 2019:

“I believe government authorities are mostly under-informed about cryptocurrencies, and Blockchain Society Ghana hopes to rectify that by having more dialogue. We hope to clarify the legitimate uses of crypto and how to distinguish from scams.”

Will Ghana Base Its CBDC on Blockchain?

What remains now is to see whether the Ghana Central Bank’s digital currency will run on blockchain infrastructure. The bank is yet to respond to questions about the details of its central bank digital currency pilot project. It seems unlikely that the project will be based on a blockchain platform. It might not be the case considering the current stance of the Ghanian SEC and its central bank.

Simultaneously, the surge in the number of mobile users in Ghana shows that the medium may be a prime candidate to offer the infrastructure for the scheduled central bank digital currency.

Nonetheless, the probability of an e-cedi being issued and available to the general public in Ghana is a major step toward offering a regulated, digitized form of payment in a nation that has in the past struggled with soaring inflation.