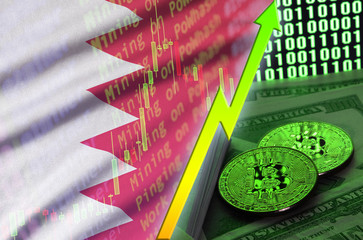 The financial world is growing and changing with every passing day. In that context, the Bahrain Economic Development Board (EDB) has now introduced a new program that attracts more startups to the country.

According to an October 29 press release, the large investment promotion agency for the Kingdom of Bahrain has officially introduced a fast-track setup program for all the fintech startups looking to do business within the country.

Reliable sources confirm that the initiative will offer an expedited entry process. This process will cover residency registration, visa requirements, and business registration processes. It also offers extensive guidance from the country’s incubators and accelerators and access to grants and all the needed financial supports.

The EDB lauds Bahrain in its statement terming the country as a better place to do business than its neighbors. Also, Bahrain is accepting policy towards the crypto and open banking industries. The EDB went on:

“The Kingdom’s pioneering, agile and flexible regulatory framework allows it to regulate emerging technologies – such as open banking and cryptocurrencies – in a way other jurisdictions simply cannot. Thanks to this, Bahrain has earned a reputation as the region’s de facto test-bed for cutting edge technologies.”

The Middle East Nations Shifting from Hydrocarbons to Blockchain

Several countries in the Middle East region are competing relentlessly to become the leading tech hubs of the region. All that is taking place as economic planning authorities diversify their respective national economies to look beyond hydrocarbons like oil and gas.

The United Arab Emirates (UAE) has been vocal in its pursuit of blockchain developments and artificial intelligence technologies. Last month, the country’s Securities and Commodities Authority drafted a resolution focusing primarily on regulating crypto-assets. The new resolution is expected to offer increased clarity for all crypto-related projects in the entire country.

The UAE’s Ministry of Health and Prevention unveiled a blockchain system in September. The system is useful in the recording and sharing of healthcare data. Additionally, Dubai launched its Dubai Blockchain Strategy 2020. In that strategy, it set targets to become the first “blockchain-powered” city by that year.

As part of that Strategy, the Department of Economic Development in Dubai said that it is moving to a blockchain-based unified business registry platform earlier in October. The Central Bank of Bahrain launched a regulatory sandbox in February 2019 for blockchain firms. The sandbox aimed to help the firms to test and develop new concepts without encountering any compliance issues.

In the same month, Shariah-compliant crypto exchange Rain was recognized as the first digital asset exchange to complete the sandbox.