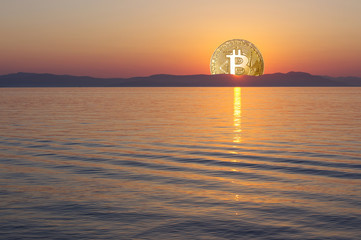 Data obtained from Coin360 revealed that Bitcoin put an end to its choppy trading style on October 16. It lost almost $300 within minutes. Initially, the markets had rejected a steep drop with some of the crypto exchanges showing a BTC price reverse action at $8,000. Those levels came under intense pressure later and gave way to lower prices.

However, Bitcoin has now climbed back above $8,000 according to the latest market reviews on October 17. The climb is attributed to the news from the United Kingdom stating that the UK had agreed on a deal with the European Union over Brexit.

The top crypto seems to be behaving more like the sterling pound (GBP) on October 17. So far the token has gained around 1.25% against the dollar to hover around $8,100. After heavy selling pressure on October 16, the BTC trading range had remained under the psychological $8,000 boundary.

As has become the norm for Bitcoin in recent months, sudden moves up and down continue to give local volatility to the market. BTC/USD has managed to retain its new support for just hours so far. As reported in the past, political tensions, including Brexit, have influence Bitcoin’s momentum in 2019.

Currently, the traders are starting to appear more buoyant about what the future holds. John Bollinger, the Bollinger band inventor, stated that he was looking at the potential for Bitcoin to offer a mid-term head fake. “Wait for it,” he summarized his sentiments in a Twitter post on October 17. A head fake describes a move from BTC in one direction, just to reverse abruptly.

Other analysts also supported the idea of a U-turn. Some renowned analysts like Michaël van der Poppe think that Bitcoin will regain its bullish momentum even before reaching the $7,400 support level. He said that these are interesting market dynamics amidst the rumors that buyers were waiting for a dip below $6,000.

Altcoins Coming to the Rescue

Most of the major altcoins started to slowly reverse their fortunes after suffering heavy losses on October 16. At the time of writing, the performance was mixed with tokens gaining or losing minor amounts.

Ether (ETH), the second-largest cryptocurrency by market cap, was still approximately 1.4% down in the past 24 hours at $176. XRP gained around 2% while the Binance Coin (BNB) was up 0.5%. The general crypto market cap improved to reclaim the $220 billion after falling to $216 a day earlier. Notably, Bitcoin’s dominance dropped to 66.2% showing that the altcoins are recovering slightly faster than BTC.