Subject Libra to Supervision Before Letting it in: SAFE Official Tells China 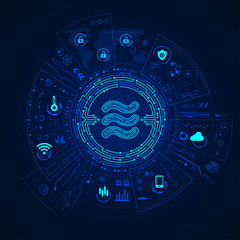 An official of China’s foreign exchange regulator said on August 10 that Libra should be classified as a foreign currency. Furthermore, he said that it should get integrated into the general framework of the country’s foreign exchange management. Knowledgeable industry insiders think that the issue and use of Libra in the Asian country are under discussion and it is too early to decide on the best conclusion.

The chief accountant of the State Administration of Foreign Exchange (SAFE), Sun Tianqi has keenly analyzed the impact Libra may have on cross-border fund flows and online foreign exchange management. He suggested some countermeasures during a financial summit held on August 10. He said:

“Libra should be regarded as foreign currency and integrated into the framework of China’s foreign exchange management as the cryptocurrency can move freely across borders. Otherwise, the use of Libra should be prohibited.”

If Libra has to enter China, it must be under supervision. However, the involved parties should discuss whether Libra may be considered a currency before it is regarded as a foreign currency. The chief economist of Industrial Bank Corp, Lu Zhengwei, explained that foreign currencies have considerably high convertibility all over the world. But, it is still unclear if Libra will be recognized by the central banks to boost its convertibility.

Facebook announced that 50% of its reserves are stored in US dollars. But, the specific composition of the asset basket that pegs Libra remains a mystery.

Experts note that Facebook acknowledged that the basket features multiple convertible currencies to guard against any losses. Lu added:

“There are many problems to solve before Libra could enter China’s financial market.”

The Worries and Challenges

In China, all settlements must be denominated in yuan. But the current overwhelming opinion is that Libra may strengthen the dominance of the United States Dollar. Moreover, it may extend America’s long-arm jurisdiction. All individuals and entities that deal with Libra must operate under the long-arm jurisdiction as stipulated by the US’  principle of ‘minimum contacts and half of Libra’s reserves are in dollars.

Sun explained that all cross-border financial services must be licensed in China and Libra is not an exception. He added:

“In the existing non-digital and digital monetary environment, cross-border financial services have presented increasing challenges to regulation and supervision.”

The deputy director of the Payment System Department of the central bank of China, People’s Bank of China, Mu Changchun, believes that Libra’s transaction speed is considerably slow to meet all the e-commerce demands in China.

Libra has 1,000 strokes per second according to Facebook’s white paper unveiled on June 18, 2019. Adopting pure blockchain architecture cannot meet the significant demand for high concurrence when issuing a digital currency in a very large country like China. For now, Libra is facing huge challenges from regulators and Facebook is not yet sure when their project will see the light of day.

Only time will tell whether China will open its doors to Facebook’s Libra project.