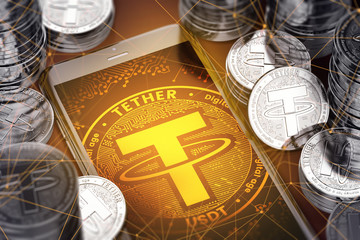 Recently, Tether has made headlines after printing around $5 billion in quick succession on the Tron blockchain. Some commentators think that it is somehow affecting the price of Bitcoin but it is yet to be proven. Now, the Tether (USDT) stablecoin is about to be unveiled on its fifth blockchain, Algorand. The company made that announcement in a tweet published on July 17.

The company explains some of the primary characteristics of this chain in a press release. It discussed matters concerning the forthcoming release of the stablecoin on the Algorand blockchain as published by Tether. According to that statement by Tether, Algorand wants to create a

Paolo Ardoino, Tether’s chief technology officer, commented on the development. He stated that unleashing Tether into the Algorand ecosystem will further contribute to blockchain interoperability and collaboration. The team at Tether is very excited about the potentials this new development brings in to the decentralized ecosystem.

According to this Medium post published in April, stacking-as-a-service Company POS Bakerz, Algorand strives to solve the so-called blockchain trilemma. Trilemma is the difficulty of developing a system that is decentralized, scalable, and secure all at the same time operating simultaneously. In the Algorand’s consensus protocol, Pure PoS, the security of the network primarily depends on the honesty of the majority.

Reports from June revealed that Algorand raised more than $60 million in a token sale on the Coinlist financial services platform. In May, USDT was deployed also on the EOS blockchain that now makes Tether running on five different blockchains with Ethereum, Tron, and Omni being the others.

Despite the pullbacks in the general crypto markets, blockchain developments keep increasing with Tether ranking among them.