Tezos is Gushing Persistently Upwards; Here is Why 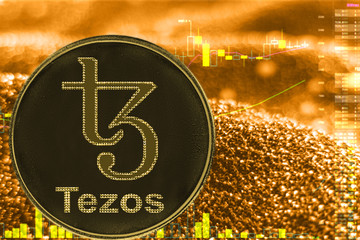 Since the start of April, Bitcoin awakened and it took the whole crypto market exploding upwards with it. The surge has continued and recently the largest crypto surpassed the $13,800 before correcting the price settling around $11,500. Currently, Tezos coin abbreviated as XTZ is showing major growth among the top 25 digital tokens. It has a growth of around 8% in the last 24 hours.

In general, Tezos is steadily developing its reputation as the best and most functional alternative to Ethereum blockchain. It has already received endorsement from top crypto investors and influencers like the Winklevoss twins, Tim Draper, and Polychain Capital.

It came into the crypto scene by collecting $232 million in a then record-breaking ICO. Since then, they delayed the launch date due to behind-the-scenes issues and challenges. However, Tezos finally launched in September 2018 and has so far grown leaps and bounds. So what is Tezos?

Arthur Breitman and Kathleen Breitman describe it as a decentralized blockchain that governs itself solely by establishing a true digital commonwealth. The commonwealth group links together as a result of their shared interests and goals. Tezos strives to make all their token holders to work together making decisions that will enhance their protocol over time.

This blockchain has a lot of features that make it unique.

There is no definite answer to the question: ‘what is Tezos?’ The Tezos blockchain is designed to use an agonistic native-middleware that is known as ‘Network Shell.’ The shell enables developers to create a modular style that features a self-amending ledger. Its generic blockchain protocol is sub-divided into three layers:

Their token was launched via the Ethereum protocol. However, the bank announced that it will now move the token to the Tezos blockchain. Although the bank remains a protocol and technology sceptic, and continues to use the Ethereum protocol, it considers Tezos to be a global player with a thriving blockchain for asset tokenization.

Dalma and BTG confirmed that they were planning to tokenize many of their alternative and traditional investments on the Tezos blockchain. They will also tokenize projects that feature global sports clubs and equity and debt interests. Tezos is a “self-amending blockchain” and smart contracts platform as highlighted in the banks’ announcement.

Although both Tezos and Ethereum feature smart contracts, Tezos is authenticated by proof-of-stake (PoS). It also has on-chain governance as opposed to the off-chain and proof-of-work (PoW) model that is followed by Ethereum. The opposing methods used by these two blockchains have resulted in lots of debates.

Many analysts and commentators have billed Tezos as one of the early ‘Ethereum killers.’ Arthur Breitman, Tezos’ co-founder, said that his rationale for the blockchain system was to have a solid and safe ledger. He added that such a system cannot be achieved when only one person is in charge of an entire sector.

The CEO and Founder of Draper Associates, Tim Draper, is a prominent Tezos stakeholder. He commented about the banks shifting to Tezos Blockchain saying:

“We are excited to see BTG Pactual and Dalma Capital making use of the Tezos blockchain–we are believers in the Tezos project and see a strong use case for security tokens.”

The addressable market for security tokenization is valued in excess of $268 trillion. It comprises of the global stock of investable financial assets. Therefore, it is logical to consider this sector to be the main focus of the next iterative step in the pervasion of blockchain in finance. Future developments may address the $595 trillion global derivatives market on blockchain network.

Thus, partnership with the third largest bank in South America and the great potential for growth that blockchains have including Tezos are responsible for pushing the price of the XTZ token higher. Tezos is also considered to be a better version of Ethereum and this makes more users to jump onto it including large institutions.