Blockchain Node Consolidation: Should We Panic? 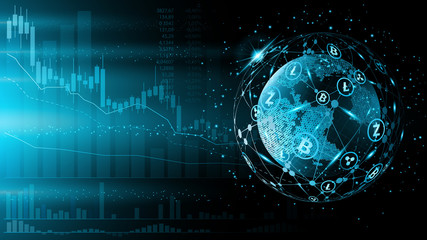 Facebook recently entered into the cryptocurrency officially announcing its Libra “cryptocurrency.” That move resulted in a somehow predictable criticism that it will enable an already dominant firm to amplify its control over the world’s social and commercial interactions.

Scott Shey, the founder and chairman of Signature Bank of New York, said that allowing Facebook to mints its virtual token would turn it into the biggest anti-competitive trust case in history. He proclaimed that if Libra sees the light of day in the global markets, it will make the early 20th century Rockefellers and Morgans seem completely competitive.

The Facebook frenzy, however, hides some consolidation trends forming within the maturing cryptocurrency industry. In-depth research delivered at the 6th Workshop on the Ostrom Workshop held at Indiana University reveals some interesting results. That research focused primarily on the effective control of blockchain governance.

According to that study, the existing distributed ledger currency systems like Ethereum and Bitcoin might ruffle the antitrust regulators despite their promise of decentralized democratic currency systems. They raise concerns due to their susceptibility to influence by concentrated interests.

The defining feature of virtual currencies like Ethereum and Bitcoin is their full utilization of distributed ledger systems. All these innovative systems use common-pool software and complex incentives primarily based on game theory. The integrated cryptography maintains many distributed copies of an ‘authoritative’ ledger that cannot be hacked easily.

Distributed ledgers do not rely on a single centralized authority controlling any right to participate or access the ledger data. The more the number of ‘nodes’ holding copies of the ledger and software used to validate and update ledger content, the more ‘distributed’ the system is perceived.

Systems with more nodes are believed to be less likely to experience effective system from a single node. All processes on the ledger are managed by the software that is common to all the nodes that make up the system.

Who Controls the Nodes?

Although the distributed ledger technology is decentralized, one real-world entity can control the system if it successfully assumes governance control of most of the nodes at low costs. This form of control may come about with the coordinated nodes agreeing to ‘fork’ through the adoption of new software and eventually defecting to a new system.

Many forks have occurred as a result of easy copying of the ledger and its open source software. However, most of them fail since few nodes coordinate to sustain a stable and valuable currency which the end-users want to use. That has created a real “first-mover advantage” for “original” blockchain currencies like ETH and BTC since successful forking is highly expensive.

A notable fork happened when Ethereum forked in 2016 into Ethereum Classic and Ethereum. That separation happened after the node-operating community disagreed about how to address the theft of a huge quantity of ether tokens. The thief exploited a vulnerability in the code on an Ethereum platform application.

However, the Ethereum fork was quite expensive off the system measured by the amount of time spent by the participants in debating appropriate changes. Furthermore, it was quite expensive since it resulted in the significant loss of value of Ethereum and Ethereum Classic virtual tokens.

Cheap control is achievable if one entity manages to acquire majority of near-majority of the nodes. Perhaps, a good example of an entity that has managed to acquire a large amount of nodes is the Chinese firm Bitmain. The company manufactures specialized node-operating/mining equipment that is designed to enhance Bitcoin software operations.

The enhanced operations have resulted in ownership of large ‘mining pools’ like BTC.com and Antpool. Bitmain leases access to third parties and its major stake in ViaBTC enables it to exercise significant influence in the market. Bitmain currently has almost 75% of the market share of mining equipment. Its affiliate mining pools accounted for around 50% of Bitcoin traffic last September.

But, with time the node operation can become standardized as the system stabilizes becoming fine-tuned to the software algorithms. These nodes have an advantage over those with higher costs since they operate cheaply. Hence, the inefficient node operators can never compete and exit from the system. In such a model, the more cost-effective operators in business survive.

The total number of active nodes eventually decreases. These incentives integrated in the Bitcoin system software have provided opportunities that Bitmain has capitalized upon. Bitmain found these loopholes in their manufacturing and mining pool operation.

How Many Nodes Exist Now?

To put that data into clear perspective, estimates show that on May 1 there were over 20,000 separate copies of the Netflix video content library hosted on servers worldwide. That accentuates the firm’s policy of letting all internet service providers serving multiple customers to hold a copy of the library on their servers to enhance Netflix content delivery performance.

Decentralized blockchain nodes work in the same way as service providers operate in the Netflix analogy. Any issues affecting one server will hardly affect the entire system.

Centrally issued software is known to maintain the data integrity of both cryptocurrency ledgers and Netflix libraries. Those that control the development of crypto software can apply some control over the systems that render them susceptible to possible anti-competitive abuse. Therefore, the antitrust authorities may be interested in more than Facebook’s pending entry into the cryptocurrency world.

There is no need to worry for now since the crypto and blockchain technologies are still nascent and evolving rapidly.