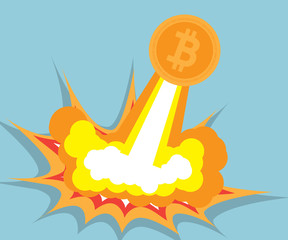 Since the start of April, Bitcoin has kept rising and has so far maintained the upside momentum. As predicted by traders and investors in the course of this week, it would not take long before bitcoin smashed the $10k psychological barrier. The milestone was reached on June 22 during the morning Asian trading session.

The surprise came next as Bitcoin did not take time to breathe before rising higher. Most analysts and commentators had predicted massive profit taking at around $10k but there is no evidence of that so far. Gaining over 10% for the day, Bitcoin settled at around $10,900 a few hours ago. It has so far registered highs of $10,962 and could be headed higher int he coming hours.

Volume has increased to $23 billion as the market capitalization sets its eye on $200 billion. Bitcoin’s market dominance is now headed to 60% currently. Profit taking seems to have started around $10,900 as the token fell to around $10,500 before continuing with its upward momentum.

Fundstrat’s Tom Lee predicted that massive FOMO would kick in at the current levels. Mainstream media has already started reporting that BTC is back at five figures. Also, with Facebook joining the crypto scene, it seems like the crypto market has got a legitimacy stamp that has eluded it for long and now it is ready to rise again.

A long term trader called ‘CryptoFibonacci, noted that looking at it from a technical angle, a sharp pullback within the Bollinger Bands would be expected.

Currently, the place is a long way out above the upper Bollinger Band. Thus, a major pullback could be imminent. A little sideways action and consolidation would be the best scenario before Bitcoin moves to $11,500.

So far 2019 has not seen any major correction. Just consolidations followed by an upside move. Now it is quite clear that whenever Bitcoin does a pullback, savvy investors and traders load up massively catalyzing the next wave higher.

$100k Appears in the Horizon

A renowned chart analyst, Peter Brandt, has taken a thorough look at the bigger picture as Bitcoin enters the fourth parabolic phase. He believes that BTC has taken aim at $100,000 target. $btcusd is experiencing its fourth parabolic phase since 2010. No other market in 45 years has gone parabolic on any log chart in this style. Evidently, bitcoin is a unique market.

Bitcoin takes aim at $100,000 target. $btcusd is experiencing its fourth parabolic phase dating back to 2010. No other market in my 45 years of trading has gone parabolic on a log chart in this manner. Bitcoin is a market like no other. pic.twitter.com/wE4j3riMgI

Bitcoin’s market dominance is hovering around 60% as it dominates the altcoins once more like it did in 2017. Nevertheless, just like in the previous market cycles, another altseason is imminent. This happens ass traders take profits from bitcoin and sink them into altcoins.

In the past 24 hours alone, the crypto market capitalization has accumulated over $20 billion. Bitcoin leads those charts after pumping $1,000 in a few hours. A few other cryptos are following bitcoin’s lead. Binance Coin knocked on a new all-time high nearing $40 while Ethereum finally topped $300.

In the current cryptocurrency market, Bitcoin is king. For the past few months, it has shown that it is still the undisputed leader in this nascent industry. When massive fear of missing out (FOMO) kicks in, there will be nothing to stop Bitcoin from smashing its 2017 all-time high. Some analysts think that if it maintains the current momentum it will soon surge towards six figures.

Whether it is FOMO or the entrance of institutional investors into the industry, only time will tell what will fuel the next massive bull run in the crypto space.